Parliamentary Committee B on Defence and Security gets first female president 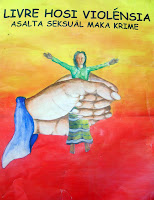 East Timor Legal News 20/08/2012 ETLJB - The East Timor Parliamentary Committee B on Defence and Security which is tasked with making recommendations for laws and policies on defence, national security and foreign affairs, has had its woman, Maria Lurdes Martins de Sousa Bessa, appointed as President. Mrs. de Sousa Bessa is joined by three other women on this Committee which has a total of 9 members.

Civil society security sector monitoring organsiation, Fundasaun Mahein (FM), stated that this appointment indicates a new level of empowerment for women in the defence and security sectors which have previoulsy been male-dominated in both membership and leadership. FM expressed the hope that the women on Committee B will advocate for the interests of Timorese women on all future defence, national security, and foreign affairs legislation and focus Committee B’s attention on women’s issues in the security sector; particularly the high levels of domestic violence in the country.

The appointment of  Mrs de Sousa Bessa as president of Committee B follows the rejection by the newly elected President, Taur Matan Rauk, of a woman as the Minister for Defence and Security in the V Constituional Government. Mrs Maria Domingas Alves, who is known as Mikato, had been proposed by the new coalition government led by Xanana Gusmao as the Minister for Defence and Security but the President objected and there were last minute moves to replace Mrs Alves with a man, Cirilo Jose Christopher in her place. Mrs Alves is one of East Timor's highest-profile women in politics, having presided over the Ministry of Solidarity and Social Services, during an extended crisis of internal displacement, the launch of an old-age pension and aid to veterans. The Women's Network (Redo Feto) condemned the President's objections and the Women's Group of Parliament spokeswoman told the media that that episode had killed the spirit of participation among women.