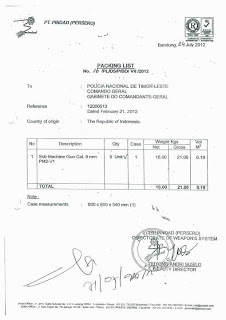 1. Issue of Missing Weapons continues to cause concern in East Timor The East Timor State Secretary for Security (SES) has denied assertions by the civil society organisation, Fundasaun Mahein, that the SES does not have the necessary institutional capacity to purchase weapons for the national police force. Radio Timor Leste reported today  that the Secretary had conducted a viability study before purchasing weapons which found that the weapons used the the Border Controal Unit were not functioning optimally. He added that the police had requested the acquisition of 75 new weapons following the weapons viability study.

"PNTL had held a viability study and had contacted me to purchase new 75 weapons for them to hand them over to the Close Protection Unit (CSP)," Mr Gutesses is reported to have said.

The State Secretary for Security further stated that Fundasaun Mahein's criticisms of the purchase of the new weapons were baselss.

However, despite the SES' denials of the civil society organisation's criticisms, Mr Guterres is also reported by Radio Timor Leste today to have established a team to conduct an inspection of all police weapons in response to concerns raised by Fundasaun Mahein over the many weapons that went missing during the 2006 political crisis that have yet to be recovered. The inspection team had been set up in 2009 to identify the missing weapons.
Guterres said to set up the team to respond to Fundasaun Mahein (FM) concerns over the missing guns in the 2006's crises.

Meanwhile, Diaro Nacional reports that the Commander of the East Timor Defence Forces, Major-General Lere Anan Timur, has called on the Timorese community not to panic about the latest weapon lost by a police officer at a brothel in Dili.

He added that even though it would not destroy the nation, the police officer who lost the weapon must be held accountable for that.

General Lere has also remarked that losing weapons should be  serious crime because weapons were an instrument of war and on the Police Commissioner Monteiro to resolve the serious problem of the lost weapon.

Timor Post also reported today that Commander Lere said he knew Commander Monteiro could resolve this problem as it was a serious issue. "I am saying that Commander Monteiro knows how to resolve the case. But it should be resolved through one way and that is by making the loss of weapons a crime," he stressed.
In relation to the case, the National Parliament called on the Timorese National Police Commander, Longuinhos Monteiro to resign from his post.

2. Disgraced former Justice Minister ready to be jailed. Timor Post reported today that the former Minister for Justice in the IV Constitutional Parliamentary Alliance Government, Lucia Lobato, said she was ready to go to jail in Gleno if the Court of Appeal upheld the Dili District Court's decision to convict her on serveral corruption-relatd charges.

Ms. Lobato explained that if the Court of Appeal overturned the Dili District Court's conviction and declared her as not guilty of the charges, then whe woudl request the Public Prosecution to rehabilitate her credibility.

"If the Court of Appeal decides that I am guilty then I am ready to go to prison," she said.

The District Court decided to sentence Lobato for five years in prison for her abuse of power.

3. Civil Society continues to call for justice for past human rights violations Jornal Independente reports that the National Alliance for an International Tribunal (ANTI) has again called on the the United Nations to take on the responsility of investigating human rights violations committed during the illegal occupation of the national territory between 1975 - 1999.

The calls came during the two-day visit to East Timor by the Secretary-General Ban Ki Moon whose principal mission was to discuss the termination of the United Nations Integrated Mission in East Timor (UNMIT) in December this year.

The coordinator for National Alliance for International Tribunal (ANTI), Sisto dos Santos made the request in an official letter asking for the UN to be responsible for justice for the human right violation committed in the past.

ANTI called on the United Nations to detain the perpetrators of human right violations; especially Indonesian armed forces personnel to face an international tribunal.
In relation to UNMIT, Jornal Independente has also reported that the family of a traffic victim killed in a collision involving an UNMIT vehicle has urged the UN to pay compensation for the loved one.

The former UN Secretary-General's Special Representative to Timor-Leste, Ameerah Haq, had promised to give them compensation, but nothing had happened, Mr. da Costa said.

4. Stabbed radio reporter on road to recovery Jornal Independente has reported that Radio RAKAMBIA's reporter, Leoneto da Cruz Gonsalves, who was seriously injured when two men on a motorcycle stabbed him outside the Anti-Coruption Comission's office in Farol, Dili, last week, is feeling a lot better.

Speaking from his hospital bed, Mr. Gonsalves told Independent yesterday that he was improving after four days of being in a serious condition.

Mr. Gonsalves was stabbed at about 5:45 am but was able to walk to the Radio Rakambia studio at Kampung Alor to seek help from his colleague and presenter, who took him to the Guido Valadares National Hospital, he said.
at Friday, August 17, 2012