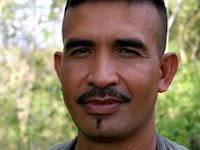 17/09/2008 Dili - Slain East Timor rebel leader Alfredo Reinado had an Indonesian citizenship card in his pocket when he was shot on February 11 during an attack on the president, media reports said Wednesday.

Reinado, a former commander of the military police in Dili until he left his post and took up arms against the state in 2006, led a handful of rebels to the president's home in Dili, where he was shot dead by presidential guards. However, his men continued the shootout and 30 minutes later President Jose Ramos-Horta was shot twice as he walked toward his home.

According to the autopsy report, the card was found during the autopsy the afternoon of February 11, reported The Timor Post.

With a citizenship card, or KTP card as they are known in Indonesian, Reinado could have fled Timor after the attack.

The Indonesian Embassy in Dili denied that the document was ever officially given to Reinado, diplomats told Deutsche Presse-Agentur dpa. Victor Sambuaga, the Indonesian head of political affairs in East Timor, said KTP cards are given only to citizens born in Indonesia.

Sambuaga said he had no idea whether or not the card was real or forged as Timorese authorities have yet to release the card to his government for inspection.

He added that after seven months of investigation, the Timorese government has yet to request any information about the document.

Sambuaga said newer cards are digital and solid plastic, but an older card could have been tampered with quite easily. He suggested Reinado got a real card and doctored it.

'The old type was only laminated so the photo could easily been cut open and changed,' Sambuaga said.

When President Ramos-Horta returned to East Timor in April after two months of recovery in a Darwin, Australia, hospital, he accused Indonesian television station Metro TV of giving Reinado travel documents and smuggling the rebel over the border in 2007 to do a TV interview.

Metro TV has denied any illegal activity and Ramos-Horta has since rescinded his accusations, though this latest revelation could spark renewed speculation.

Monsters and Critiques
at Wednesday, September 17, 2008