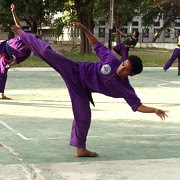 Policy Innovations By Sheila Oviedo 12 September 2008 - East Timor's youth gangs have been more than a headache for the nation's new government, flaunting names like Devoted Heart Lotus Brotherhood, Sagrada Familia, Seven-Seven, and El Diablo. Notorious gangsters such as Lito Rambo, Ameu Van Damme, and Kung Fu Master were behind the country's first post-independence outbreak of mass violence in 2006.
But this summer, after riots resulted in 30 deaths and the displacement of around 200,000 people in Dili, the capital, gang violence appears to have subsided as a result of intensified government and NGO initiatives. Read more...