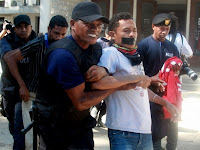 We are pleased to share news of our latest publications, and some our activities related to the National Parliament and in the security sector reform. We welcome your comments and look forward to future collaboration to increase respect for human rights in Timor-Leste.
Demonstration against National Parliament plan to buy luxury cars On 11 and 12 June 2008, university students (Timor-Leste University Front, FUTL) assembled 1500 to 2000 people for a peaceful demonstration in front of the National Parliament to protest the planned purchase of 65 luxury cars for members of parliament.
According to the students the actual situation the average person faces includes an inability to cope with rising prices; as representatives of the people, the members of parliament deny this reality and push to buy luxury cars for themselves.
From a moral perspective, they are insensitive to the people’s suffering. From a legal perspective, the budget existed to purchase 26 cars, one for each commission, at a total cost of $910,000; not to purchase 65 cars­one for each member of parliament for a total of two million dollars.
This meant an additional $1,090,000 in the mid-year budget ratification to secure sufficient funds. From an economic perspective, why not allocate the funds to meet people’s basic needs, especially in the current situation. From a social perspective, the deputies are creating a gap between themselves and the population, and developing a bad social culture for the future. They are creating the idea that becoming a Member of Parliament means getting a car. Because of all this the students demonstrated to stop them from buying these luxury cars.
Assocaition HAK was involved in the organization of the demonstration with both moral and material support, along with other national NGOs such as Fokupers, Haburas and the National Youth Commission of Timor-Leste (CNJTL).
FUTL planned a second, five-day demonstration from 7 to 11 July 2008 at the main National University of Timor-Leste (UNTL) campus in Dili, as a continuation of the 11-12 June protests. However when FUTL and another student group, FOKUTIL, submitted a letter to the Dili District Police requesting authorization for the demonstration, they were denied use of the main UNTL campus citing Law No. 01/2006.
The law prohibits demonstrations less than one hundred metres from public buildings. Consequently, the Timor-Leste National Police and UN Police (UNPOL) authorized the demonstrators to use the Democracy Field. The organizers did not accept the change in venue, and taking advantage of the campus’ autonomy, demonstrated from the main UNTL campus again expressing their demands that parliament cancel its plans to buy an additional 39 luxury cars to have one to distribute to each Member of Parliament.
The demonstration, a peaceful, silent action with mouths taped closed and fasting could not be realized due to police intervention during which 51 students were detained when they taped their mouths closed and stood silently with a banner on the balcony of the national university’s main campus, only about 25 metres from the national parliament building. During the activity University property was damaged­glass from windows and doors broken. According to HAK, some of the damage was done by the university students themselves and some glass was broken when the police shot tear gas at the students.
The 51 arrested university students were investigated, while in police detension for seventy two hours, and then had a preliminary hearing at the Dili District Court. All the students were represented by attorneys during this process, Natercia de Deus Bárbosa from HAK Association and Wilson Cabral acting in his professional capacity. The final result of the hearing was that the Dili District Court released all 51 on their own recognizance (identities and residence­TIR).

Since January 2008 HAK Association has represented Timor-Leste’s civil society and national NGOs, as a nomine of the Prime Minister, on the panel evaluating the Timor-Leste National Police (PNTL).
Aniceto Guro Berteni Neves is HAK’s representative; his role member-observer. From January until June the panel, established by government resolution 22/2008, evaluated and made recommendations regarding 1430 police.
They recommended 1196 PNTL members for re-training and recertification. 234 PNTL members were given pending status due to allegations of involvement in criminal activity against them. Some of the allegations stem from early in their police careers and some relate to their involvement in the 2006 crisis.
The allegations are based on data from PNTL, UNPOL, the Provedor for Human Rights (PDHJ), Prosecutor-General, United Nations Human Rights Unit and the Transitional Justice Office of the United Nations Integrated Mission in Timor-Leste (UNMIT). There are also complaints and reports from civil society organizations, including HAK itself, and from the general public. The national evaluation panel is composed of representatives chosen by the President of Timor-Leste, Prosecutor-General, UNMIT Human Rights Unit, UNMIT Transitional Justice Office, the Catholic Church, and UNPOL itself.
For more information please contact: Antonio Maria Soares at direito@yayasanhak.minihub.org
Jill SternbergAssociation HAK (Association for Law, Human Rights and Justice)Rua Governador Serpa Rosa T-091, Farol, Dili, Timor-LesteTel. +670-331-3323 or +670-740-2774 mobileEmail: jillberg@igc.org skype: jillberg
at Tuesday, September 30, 2008