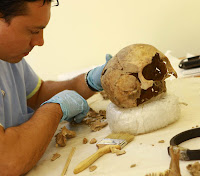 This is both for legal identification and to examine the physical evidence in collaboration with the forensic pathologist, crime scene officer and regional investigation teams.
In short, I put names to the dead and help see that justice is done.
The role involves the search for and exhumation of human remains; assisting in the creation of a DNA identification programme; and developing, implementing and revising policies and procedures relating to the forensic laboratory, including coordination with human rights groups and family associations.My job is important for the maintenance of the rule of law in the country as it upholds the UN’s stance against an amnesty for the crimes against humanity that occurred in 1999.
The policy contains essential components of good governance and universal human rights, which the United Nations Integrated Mission in Timor-Leste (UNMIT) is mandated to promote.
At present, a typical day includes revision of our medical-legal documents with the Serious Crimes Investigation Team (SCIT) legal coordinators; liaising with NGOs on past forensic cases; preparation of lecturing material for the national police (PNTL) and coordinating on behalf of the SCIT with the Office of the Prosecutor General on DNA testing matters.
One way I think I’m currently making a difference actually began during an administrative delay. There was a hold-up in attaining a Memorandum of Understanding between the SCIT and the Prosecutor General’s office, but I was able to use the period constructively by helping build the local SCIT forensic officer’s capacity in best practices.This included mentoring the officer in international forensic standards; improving their awareness of gender-based violence (GBV) in homicide investigations; and networking with NGOs representing victims to improve the exchange of identification information.
Once trained, the forensic crime scene officer and I jointly provided more training to the national police Vulnerable Persons Unit (VPU). For example, we showed them how to conduct effective forensic investigations of missing persons in GBV homicide situations according to international standards of human rights and jurisprudence.
I believe that as a result of my mentorship, the SCIT forensic officer I helped will become one of the country’s most knowledgeable forensic experts within the context of human rights and GBV. The mentorship programme will continue throughout my contract.
I have worked for seven years in numerous countries recovering and examining the remains of people allegedly killed in conflicts. My experience includes time with the UN International Criminal Tribunal for the former Yugoslavia (ICTY) in Bosnia (2000) and again in 2005-06 with the International Commission on Missing Persons (ICMP).My other work experience includes assisting the Royal Canadian Mounted Police (RCMP) in Vancouver, Canada; in Guatemala with the Guatemalan Forensic Anthropology Foundation (FAFG); and in Colombia as a consultant to the International Bar Association.
This is my second spell as a UNV volunteer in Timor-Leste: I was the UNV Forensic Anthropologist for the United Nations Mission in East Timor (UNMISET, the mission prior to UNMIT) Serious Crimes Unit in 2003-2004. Back then I chose to become a UNV volunteer as a means to contribute my professional skills in the arena of justice, human rights and identification of missing persons.
This time I chose to become a UNV volunteer again since I knew that in Timor-Leste I could make more of a difference in capacity building. I knew I would be able to apply my recent academic training in international human rights law within the medico-legal setting. I would have not had the same opportunities at time of recruitment with another organisation.
From UNV

Mirko Daniel Fernandez from Canada, graduated from the University of Essex in July 20007 with an LLM in International Human Rights Law.