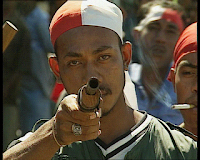 Source: Reuters - DILI, 26 Sept 2008 - The United Nations aims to complete investigating nearly 400 cases related to the bloodshed surrounding East Timor's 1999 independence vote from Indonesia, the chief U.N. investigator said on Friday. Leaders in East Timor and Indonesia said in July that the issue was closed after expressing regret at the findings of a joint truth commission that blamed Indonesian security and civilian forces for 'gross human rights violations'.

But the United Nations, which boycotted the truth commission, has said it will continue to back prosecutions through the Serious Crime Unit, which it set up to assist East Timor's prosecutors' office in probing the violence in which the United Nations says about 1,000 East Timorese died.

Several Indonesian military officials were tried in Indonesian human rights courts following the 1999 violence, but none were convicted.
'Bringing them back from Indonesia depends on bilateral agreements on extraditions. It depends also on the will of Indonesian authorities,' Marek Michon, chief investigator of the U.N. body, told reporters.
Michon said it had submitted 20 cases to East Timor's prosecutors' office, while it could take three years to conclude all 396 cases.
(Reporting by Tito Belo; Writing by Olivia Rondonuwu; Editing by Ed Davies and Jerry Norton)
-----
ETLJB Editorial Note: For accounts of human rights violations and crimes against humanity committed in East Timor by Indonesian state agencies and their proxies in 1999, visit 1999 East Timor Crimes Against Humanity.
at Friday, September 26, 2008