Timor-Leste Donates US$500,000 each to China, Cuba and Burma 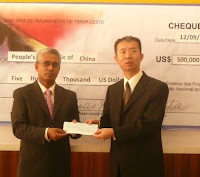 The IV Constitutional Government and the people of Timor-Leste have decided to donate five hundred thousand dollars (US$500,000) to the Chinese people to express the Solidarity of the Timor-Leste Government.

The government through the Ministry of Foreign Affairs has organized the handover to H.E. Mr. Su Jian, Ambassador Extraordinary and Plenipotentiary of the People’s Republic of China through its representative in Dili.took place on Friday the 12th of September

The objective of the donation is to make a contribution to the Chinese people who were badly affected by the natural disasters that occurred this year.

China and the broader Chinese community have played an important role in the development of Timor-Leste in different areas. Over 10 regular soccer courts have been built. The biggest is the Municipal Court in Dili with floodlights and the capacity of 10.000 spectators.

China was one of the first countries in the world to establish diplomatic relations with Timor-Leste on restoration of Independence in May 20, 2002.

Since establishing its diplomatic relations with Timor-Leste, China has continued to support the Timorese people in different areas such as construction and capacity building. In Dili many Chinese doctors operate their medical centers to serve Timorese people with their Chinese medicines.

Timor-Leste's Government has decided to donate an equivalent amount to the people of Cuba and Myanmar in accordance with the Government's Program, approved by the National Parliament. Minister for Foreign Affairs Mr. Zacarias Albano da Costa, on behalf of the Government, delivered a speech during the handover ceremony on Friday 12 September 2008
at Wednesday, September 17, 2008