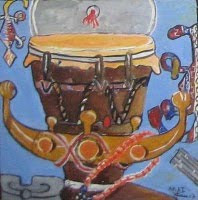 Timor Post, May 19, 2010 language source: Tetun - Eight Timorese National Police officers have testified in the court regarding the ambush set up by deceased rebel leader Afredo Reinado Alves and his followers on May 23, 2006.

During the court trial those witnesses said the ambush and shootings at that time were known to them.

The witnesses also said that the armed group members were in military and police uniforms but they could not identify them specifically.

East Timor Law Journal - Towards the rule of law in Timor-Leste.
at Saturday, May 22, 2010