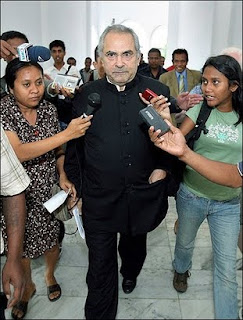 The objective of the President Horta’s visit was to provide moral and political support to the staffs of Prosecutor General so that they could carry out their work more optimally in the future.

President Horta said that the Government should better improve and care over the work of the legal aspect, so that the country’s judicial system can be run well.

“I am here to give my moral and political support to the staffs of Prosecutor General, because this institution is taking part in judicial activities. Justice in the country will not be implemented well if the Prosecutor General lacks facilities and human resources that can support its staffs to carry out their work,” President Horta said.

President Horta also called on the Prosecutor General to collaborate with the Timorese Human Rights and Justice Ombudsmen (PDHJ) and the Anti-corruption Commission (KAK) in order to combat corruption practices in the country.
at Saturday, May 22, 2010