Unidentified group engages in gun battle with police in Ermera 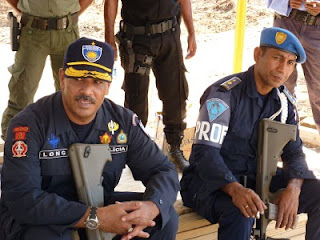 Timor Post, May 19, 2010 language source: Tetun - An unidentified armed group consisting of 13 members has engaged in an exchange of shooting with the Timorese Special police force on Sunday (16/5) night in the western district of Ermera. The group members were armed with 11 weapons.

The Timorese National Police (PNTL) Commander, Commissioner Longinhos Monteir,o said the police could not capture those people, but was only able to save the residents’ lives.

“This group has also engaged in setting blaze to the residents’ houses and abducting people. This group appeared firstly in Bobonaro during the operations of hunting down Ninja activities,” Monteiro said.

Monteiro stressed that this armed group had been supported with food and other logistic suppoorts by some of the residents.

The Parliament is also proposing to produce a resolution to engage the Timorese Defence Force (F-FDTL) to respond to this situation.
at Saturday, May 22, 2010