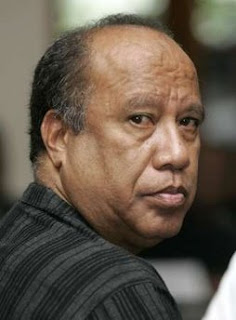 TEMPO SEMANAL Rogeiro Lobato the former Minister for Interior under the former Fretilin Government has returned home for the first time since August 2007.

Rogeiro was sentenced to jail for criminal violations after the armed Rai Los group claimed he was the one responsible for the distribution of weapons to civilians in the 2006 crisis.

He has been pardoned by President Horta and now he has totally free.

Read all about Rogerio's crimes here.