Indonesia's secret ally at Balibo: Australian Complicity in the Invasion of East Timor 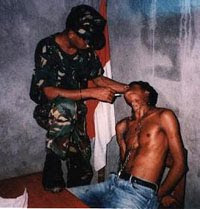 Introduction Into The Balibo Secret

Unearthed secret Defence Department documents prove a massive armaments diversion in the region was at the centre of the Balibo cover up. A conspiracy to keep all Australian Prime Ministers from 1975 onwards ignorant of the arms diversion and the secret Indonesian invasion and thus from intervening in East Timor cost the lives of not only six journalists but hundreds of thousands of East Timorese. There will be no real justice for the dead until this story is told.

There are two camps of contention concerning the questions did Gough Whitlam know of the deaths of the five journalists in East Timor on 16 October 1975 and did he see documents warning of the upcoming invasion of Balibo? It has been claimed by some people, including some of his own officials, that Whitlam actually gave the green light to President Suharto of Indonesia to invade the fledging democratic nation of East Timor.

From my twenty years of research Whitlam appears a particularly honest man with an even pedantic if not obsessive approach to protocol. When an outraged Margaret Whitlam asked her husband why he didn’t slap Governor General Sir John Kerr’s face and rip up the letter that withdrew his commission as Prime Minister, Whitlam replied “Because, Margaret, it was a legal document”. (“Margaret Whitlam”. Susan Mitchell page 266). He had a seeming profound respect, if not fixation for the sanctity of the official written word. If that is the case the following may appear shocking. If we go to the 2007 Coronial Report on the Inquest Into The Death of Brian Raymond Peters, the Coroner Dorelle Pinch notes on page 103 of her report that he was never even aware Indonesian special forces invaded Balibo in mid October 1975, "Rather he was of the impression that the first time Indonesian soldiers invaded East Timor was the attack on Dili on 7 December 1975." The Coroner then notes "As to the time he learnt of the deaths of the journalists, Mr Whitam gave evidence that he was briefed for the first time on 21 October. He stated that he was certain of the date because he was able to check his movements in his Official Diary."

So Mr Whitlam always believed the journalists were killed, not by Indonesian soldiers as the Coronial Inquest found, but in local partisan crossfire between East Timorese forces! This has been the official Indonesian and Australian Government’s line for the last 32 years! Would Whitlam lie under oath against his memory of events, let alone his own documented records. It seems out of character in the extreme that a trained and experienced lawyer would go against his memory of events as well as the document record of his Official Diaries to make a false statement and perjure himself, if he had prior knowledge of the invasion and up to the minute information concerning the murders of the Balibo Five. Read more...

Image added by ETLJB: Torture, murder and genocide were amongst the many crimes committed by Indonesian soldiers and police in East Timor during the 24-year illegal occupation from 1975-1999.
at Saturday, May 22, 2010