Gangs continue rampage of violence in Baucau and Dili 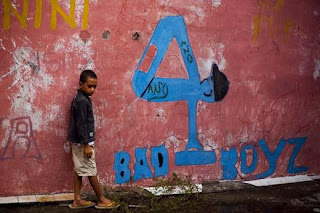 Do not ever dream to become bruiser Timor Post, May 27, 2010 language source: Tetun - The Timorese Operational Police Superintendent Chief Mateus Fernandes has called on all the martial art gangs not to dream of becoming bruiser, but try to contribute to the country’s development.

“Don’t ever dream of becoming bruisers. The important thing is development. Therefore it is important to hold discussions if there is something important,” Fernandes said.

He made the comment yesterday regarding some martial arts gangs that had engaged in recent clashes in Baucau, Dili, Indonesia and some other places in Timor-Leste.

He also called on all people to report to the National Police if gangs tried to create conflict in their suburbs.
at Saturday, May 29, 2010