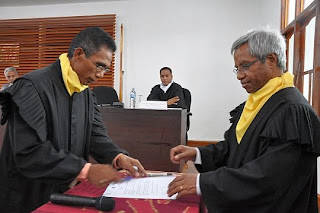 Dili, Timor-Leste 10 May 2010 UNDP In the process of boosting the institutional capacity of the justice sector countrywide, four probationary judges and five probationary public defenders were sworn into office at a colourful ceremony on 10 May, 2010. The event was held at the Court of Appeal under the direction of Dr. Claudio Ximenes, President of the Court of Appeal, and Dr. Sergio Hornai, Public Defender General.

The nine jurists have completed the coursework of the third batch of magistrates and public defenders at the Legal Training Centre (LTC), supported by the UNDP Justice System Programme. The probationary jurists will thus undertake their one-year probationary period into their respective institutions and they will keep benefiting from the continued legal and technical assistance by the LTC.

Recognizing that capacity development is a long-term process, Dr. Ximenes stressed that national sustainability of the justice sector will be achieved in around ten years. "We need to keep investing in human resources for our courts; we need to strengthen human, technical and ethical capacities of our judges".

"Today's swearing in of new probationary judges and public defenders does not signal that our work is done. It shows that our efforts are bearing fruits and that an important milestone has been reached today", said Mr. Finn Reske-Nielsen, the Acting Special Representative of the Secretary-General and UNDP Resident Representative.

The probationary justice actors will complement the national efforts to enhance effectiveness of the justice sector by joining the current 13 national judges, 13 national prosecutors and 11 national public defenders.

President of the Court of Appeal, Dr. Claudio Ximenes, swears in one of the two judges graduated from the second course offered by the Legal Training Centre. Picture by Thaiza Castilho/UNDP

The UNDP Justice System Programme is supported by Australia, Brazil, Ireland, Norway, Spain, Portugal, Sweden, the United Nations Office of the High Commissioner for Human Rights and UNDP Bureau of Crisis Prevention and Recovery.
at Sunday, May 16, 2010