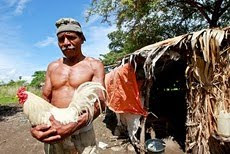 May 15, 2010 Emilia Pires is asked to leave Timor Leste The leading Newspapers in Timor Leste, the Timor Post and Suara Timor Loro Sae, report that there is urgency from people for Ms. Emilia Pires - the finance minister – to resign from her post and go back to Australia due to an email she sent to a friend in 2006.

A few days ago, MPs from the opposition party Fretilin brought to discussion the issue of leadership and nationalism of Ms. Emilia Pires. Quoting from the papers, Ms. Pires sent an e-mail to a friend in june 2006 saying “it is better for Timor to integrate to Australia…so that [Timor] can eat trice a day….” Joining the opposition party, Political Science Students of the UNTL are urging the minister to “go back to Australia” as soon as possible.

Ms. Pires, who is also the sister of Alfredo Pires - the minister of natural resources – has refuted Fretilin’s claim saying “Fretilin’s act is a breach of privacy which is protected in Timor Leste’s constitution”. She also urged the biggest opposition party in the parliament to “limit its habit of abusing power (TP)”.

Issues of nationalism have come up in the political spheres recently as the country is facing “moral” leadership challenge. Posted by Renova Timor