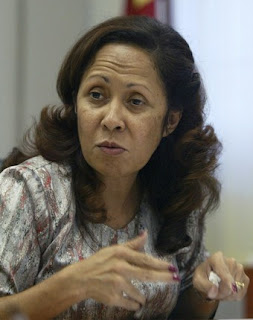 Emilia Pires: "I can tell you right now.... I would support integration with Australia.... "

In recent weeks we all heard many statements from His Excellency KayRala Xanana Gusmao about the Greater Sunrise gas field. Sunrise is an issue that we as the state and as a people must remainunited to bring the pipeline to Timor-Leste.

Accordingly from the time of the previous FRETILIN Government we wereunited on this issue, in order to ensure that our people’s naturalresources would be brought to Timor-Leste and be used to developindustries in our country, such as the petrochemical industry. Earlier we faced our powerful neighbor, but we were able to achievegood results.

We achieved these results through a process ofnegotiation with strong determination and a spirit of nationalism,which has its roots in our struggle for self determination andindependence. In this way we were able to achieve the results thatthe Timorese people had long awaited.

“Mate ka Moris, Ukun Rasik Aan!” (“Live or die – we wantindependence!”) The previous generation always cried this out, andtoday we still need to call this out because we still face obstaclesand various challenges; as a people and a nation, we still facedifficulties ahead.

The issue of petroleum resources is an issue of national interest.Australia’s foreign policy will hold tight to their interests. Ourforeign policy through our politicians must hold firmly to ournation’s interest.

At the same time, we must remain fully vigilant whilst also beingmaximum tolerance of all those who are among us. Today the FRETILIN bench questions the national conviction andpatriotism of some of those in the de facto AMP government.

Because our national interest is at stake now in the oil and gas negotiationsof the Greater Sunrise field, a negotiation which suffers fromallegations of the two sides threatening each other.

We all know that the de facto Minister for Finance, Ms. Emilia Pires,likes to employ many foreigners and she has greater confidence in themthan the Timorese staff in her ministry.

We see the contracts fora dvisors of various nationalities, including those withoutqualifications for the job, but they still receive a big salary.Perhaps then we should not be surprised when we hear about herthoughts on “Nationalism”, towards our nation that are not in accordwith what we expect from someone who is holding a governmentleadership position.

I state this because the FRETILIN bench has received proof through an e-mail that Ms. Emilia Pires sent to an activist of an international NGO, in which she wrote that she did not believe in nationalism forTimor-Leste.

On the 16th of June, 2006 she wrote: “I do not buy this rhetoric of nationalism to the point where peoplecontinue to be poor.....that does not mean we have to nationalizeeverything..... it meant we had to know how to negotiate deals whichcould bring a win-win situation for everyone.....”

In this e-mail, it is not clear what she meant by “a win-winsituation” or what negotiation she referred to, but her context isthat she does not believe that it was in Timor-Leste’s interest when Dr. Mari Alkatiri was the leader, to be ‘nationalist’ and that perhapsbecause of this, we as a nation could get a reaction from anothercountry to remove Dr. Alkatiri from power.

So now we find out that the Minister doesn’t believe in “Nationalism”.She speaks with institutions like the World Bank and IMF about whatwe should do in future with the petroleum fund? We don’t know if sheputs our “nationalism” first or perhaps she thinks of herself firstand her future career?

We don’t believe that she puts her“nationalist” feeling the same as she wrote. When she speaks with consultants who came last week for a seminarabout how to invest our petroleum fund money, such as the Australianman from Melbourne, the city where Emilia lives in Australia, is thatbecause she is thinking of “nationalism” or not? I hope that she doesnot follow her own words.

In another e-mail it clearly shows that she does not have a sense ofour national sovereignty or of our independence.

Even though we have different political views from the Deputies sitting on the other side,we all believe that our nation must be independent. We believe in ourself rule and we do not need to be ruled by others as their slaves.

All Maubere people will perhaps be shocked when they hear of or readthis e-mail where she writes to a foreign colleague/friend that: “East Timor will never have a peaceful future...... so if we are goingto leave it in the hands of people like Mari..... I can tell you rightnow.... I would support integration with Australia.... at least themanagement of the country will be under some really managers and theausies will know how to ensure our people gets their 3 feedings a dayand some decent housing.... and I am sure some good roads, goodtelephone communications, will know how to read and write,etc...etc.... the price to pay is that you no longer call yourselfEast Timorese.....” Let’s hear that again, “I would support integration with Australia”!!!

What? How can someone who holds the Minister of Finance position ever think like this? Sell the nation and the people to another country because she doesn’t like one leader.

Perhaps we should also question her actions during the 2006 coup.Because she herself writes: “Between us.... one reason apart from the pragmatic one for me to getout was that if I had stayed I certainly would have joined forces withthe rebels..... that is all I can say at the moment....”

This refers to Alfredo Reinado’s rebel group, who tried to kill His Excellency the President of the Republic, as proven in court. So now we all ask if Emilia’s phone number also appears on the list of those to be investigated by the police for the 11 February case because they contacted Salsinha on the 11th of February.

Is she to be investigatedor not? Perhaps we should investigate her in light of this e-mail we have just found.

We do not want to arbitrarily accuse anyone. For this reason the FRETILIN bench did not raise this issue before we had the chance to confirm through sources who had actually received the e-mail.

People received and forwarded the e-mail according to our sources. This is not a private issue as she speaks of the national crisis that caused so suffering and traumatized so many people. Now we understand why when she took the position of de facto Finance Minister, Australians frantically produced articles and commentaryabout how she was good for Timor.

Perhaps they knew something more?Perhaps they knew that many Australian or Melbourne advisors would get a job and would determine the direction of this country. The behaviour and thoughts expressed above raise doubts, concerns andrequire us to ask questions such as: Mr. Alfredo Pires, as younger brother of Ms. Emilia Pires, is now leading the negotiations for Greater Sunrise.

The Maubere people need vigilance and control over people who do nothave a sense of nationalism and patriotism, so that we can guarantee ademocratic state based on the rule of law and the sovereign nation ofTimor-Leste.

We await to see to where all these things will go?

Thank you for the time.

**Note TLN - See text published in full in TIMOR HU NIAN DOBEN, e-mail exchange between Emilia Pires and others.
at Wednesday, May 12, 2010