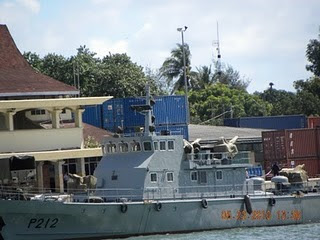 2010-05-17 - Dili, Timor-Leste, 17 May – Two patrol boats meant to reinforce the naval branch of Timor-Leste’s Defence Forces should arrive in the country this May 20th, on the anniversary of national independence, the State Secretary for Defence indicated on Friday.

The government of Timor-Leste ordered from China two Shanghai III class vessels, with a range of up to 700 miles and able to operate for long periods in the open sea.

The two vessels will be used to reinforce maritime patrols, known to be especially insufficient in the Timorese Economic Exclusion Zone, where illegal fishing has been verified.

The two new patrol boats have a crew of 36 sailors trained in China in the areas of shipboard electronics and mechanics, as well as in naval operations. (macauhub)
at Wednesday, May 26, 2010