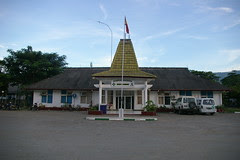 East Timor Legal News19 July 2012  Source Timor Post, July 19, 2012 - Three cars belonging to the Guido Valadares National Hospital were damaged and one Cuban doctor sustained injuries during a rock throwingincident perpetrated by an unknown group of people in the Capital of Dili on Wednesday (18/7).

Speaking to journalists, a spokesperson for Timorese Nurses Association, Santana Martins, said the three cars were stoned when they were going to the airport.Mr. Santana said they were concerned about such an attitude of the irresponsible people as it had left one of the international medical staff injured.


He wanted the National Police and the Defence Force officers to provide security for medial personnel who were doing their work and called on the Timorese people to respect all medical staff.