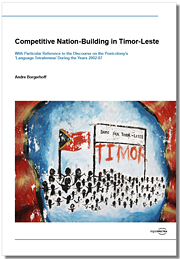 East Timor Legal News 28 July 2012 New Book by Andre Borgerhoff - Nation-building is a competitive practice – no matter how united a people were in their past struggle for independence, and no matter how convincingly pledges are made thereafter to preserve ‘national unity.’ In 2002, Timor-Leste became a sovereign state. Starting from scratch after decades of resistance war, protagonists of varying age, education, and political backgrounds had rather different ideas of building theirnew community – as the ‘Tetralemma’ of four formal languages illustrates in this book.

This study explores the enormous challenges and exciting dynamics faced by emerging postcolonial and post-conflict nations. It explains why popular expectations of inclusiveness and stake, so vital to the success of liberation movements, turn into potential sources for distress after independence. Through a combined analytical approach of nationalism, sovereignty, collective memory, and strategic groups theory, nation-building is defined as the interest and ideology-driven construction of identity which, after all, constitutes a primarily political process.