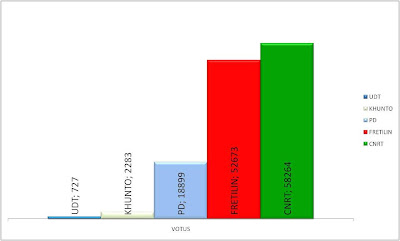 East Timor Legal News 07/07/2012 Updated provisional results of the 2012 East Timor Parliamentary election shows the Fretilin party closing the gap between it and the Congress for Timorese Reconstruction.

However, the combined votes for CNRT and PD presently totalling 77,163, will still leave FRETILIN in opposition if the governing coalition maintains its cohesiveness. It is unlikely that PD would form a coalition with FRETILIN.