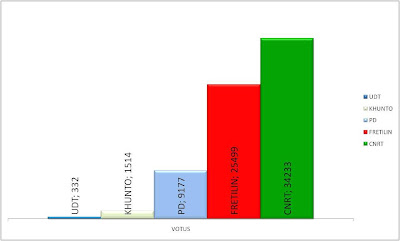 East Timor Legal News 07 July 2012 The provisional results of the East Timor general election as at 2000hrs (East Timor time) shows the governing CNRT party of the resistance leader and incumbent Prime Minister Xanana Gusmao with a convincing lead over the Revolutionary Front for an Independent East Timor (FRETILIN) with the Democratic Party in third place.

The graph of the provisional results of counting shows CNRT with 34,233 votes; FRETILIN with 25,499 and the Democratic Party with 9,177.

CNRT has been in a coalition majority in the East Timor parliament since the last election in 2007. If this coalition persists after this election, there is very little chance that the FRETILIN party will regain power.

None of the many other new parties have managed any significant proportion of the vote.

Based on these provisional results, it is most likely that the CNRT coaltion will retain power; possibly without the need for any coaltion partners and that FRETILIN will remain in opposition.
at Saturday, July 07, 2012