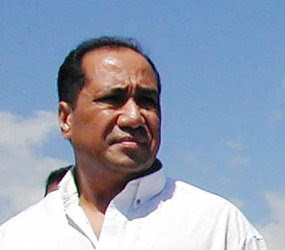 In a statement, the Secretary of State, Agio Pereira, says recent comments in the media labelling the Xanana Gusmao government corrupt are irresponsible and opportunistic.

He denies allegations that money had gone missing from the Ministry of Finance, saying that all financial transactions are recorded by Treasury, the Banking and Payment Authority, and the relevant line ministries.

The government has created a Technical Secretariat and a civil society Commission to provide oversight of all procurement spending.

The public will also be able to access real time information on how state funds are being spent on two new online portals.

Image: Agio Perreria - Chief of Propaganda for the East Timorese government. With corruption rampant in the public administration in East Timor, Perriera condemns commentators who expose that corruption. He also denied violations by the East Timor National Police in recent operations in the western region of the country while complaints by citizens were heard in the National Parliament and civil society reported numerous such abuses.
at Monday, March 22, 2010