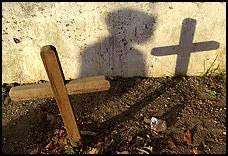 Mr. Sarmento made the call for the Government to stop the project after workers on the Pelican Paradise Company site found some human remains in the area recently.

Mr. Sarmento stressed that the project should be stopped in order to give chance to the Twelfth of November Committee and the international forensic team collect the skeletons which are believed to be some victims of the twelfth of November massacre in the 1991.

Mr. Sarmento added that the Government should consider the place as a sacred place, because those people buried in the area had sacrificed themselves for the country's liberation.

“We have to consider the place where the skeletons are found as a sacred place, because those victims who were buried in that place, they had sacrificed themselves for the country’s independence,” Mr. Sarmento said.

Meanwhile, The Parliamentary President Fernando Lasama de Araujo has said that the Government has sent equipments to the area in order to help support the process of digging and collecting the skeletons.
at Tuesday, March 23, 2010