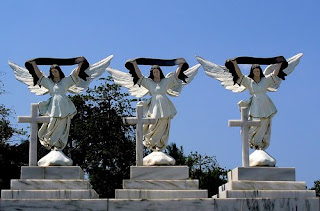 Joao Metan was found dead several weeks ago in the Cemetery of Bidau Santa Ana where he had apparently committed suicide.

“The National Investigation Police has not received the autopsy result from the HNGV so far,” Mr. Fernandes said.

Mr. Fernandes said that the police are investigating the case and that the case has been handed over to the Public Prosecution for further legal process.

Image added by ETLJB: Angels in the park at Bidau, Dili, Timor-Leste
at Saturday, March 13, 2010