ETAN: Letter to Ramos-Horta on Justice, Accountability and an International Tribunal 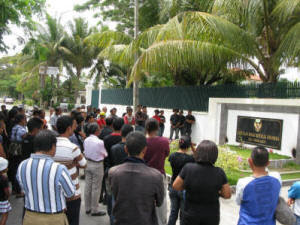 ETAN has written to Timor-Leste 's President Ramos-Horta in response to his recent remarks on justice and accountability for crimes against humanity and war crimes committed during the Indonesian occupation (1975-1999), and his attack on Amnesty International.

The letter is online - http://www.etan.org/news/2010/03jrh.htm. A Tetum translation will be available soon at the same link.

We are writing to express our sadness and deep dismay on reading your speech to the UN Human Rights Council in Geneva on March 11, 2010. In your address, you refer to having been "unfairly criticized by some fringe elements in this amorphous international community” for decisions made by you and the Government of Timor-Leste concerning justice and accountability.

While you did not mention Amnesty International by name, the target of your anger was clear as it directly followed a public dispute with them regarding your stance on an international tribunal. It is ironic that one whose heart is as forgiving as yours would issue such a strong attack on another Nobel Peace Prize laureate. Amnesty International has stood strongly for peace, and collaborated closely with you throughout the Indonesian occupation during the long campaign for human rights in Timor-Leste. To refer to them as “fringe” and accuse them of “regurgitating ready-made clichés or academic jargon on justice” is both disrespectful and engages in the same rhetorical excess you decry.

ETAN shares a number of positions with Amnesty International concerning justice and accountability for crimes committed in Timor-Leste during the Indonesian occupation and the state of justice in independent Timor-Leste. Over the years, we have debated these positions with you, both publicly and privately, and respectfully. We share your frustration that the members of the UN Security Council have not acted to implement the UN’s promise that impunity must never be tolerated. We agree that it is unfair for the burden of achieving justice to be placed entirely on the shoulders of Timor-Leste.

We proudly stand with Amnesty International and many other organizations in Timor-Leste, Indonesia and elsewhere in continuing to support an international tribunal for Timor-Leste as the best way to achieve justice and accountability for crimes committed from 1975-1999. While we are aware of the difficulties and roadblocks to achieving meaningful justice and accountability, we believe that prosecutions of those most responsible for human rights and war crimes through a tribunal would offer tremendous support to democracy and human rights in both Timor and Indonesia. This would certainly help the people of both countries recover from their traumatic and oppressive experiences and move forward to peaceful, less-troubled lives under the rule of law.

You have often said that the East Timorese people do not want an international tribunal. We must strongly contest this assertion. When we ask East Timorese what ETAN should work on, nearly everyone urges us to continue to struggle for justice and accountability. As you are aware, there is a coalition of Timorese organizations called ANTI (National Alliance for the International Tribunal) with whom we work closely. In 2005, the Timorese Commission for Reception, Truth and Reconciliation recommended a tribunal, as have Timorese, Indonesian, and UN commissions since 2000.

In August 2009, you opened a Solidarity Conference in Dili titled “The Struggle for Justice Continues,” which ETAN co-sponsored. The conference was attended by more than 200 people, at least three-quarters of them from Timor-Leste. The conference declaration, which grew out of the various panels and discussions, was approved by acclamation. It "urged the government of Timor-Leste, the international community and the UN to take principled action against impunity, and demanded an international tribunal for Timor-Leste” for crimes from 1975-1999.

You told the UN Human Rights Council that "The victims demand acknowledgement of the truth, recognition of their suffering and a measure of individual or collective assistance." But their demands are deeper. In September 2009, victims and families of victims from all 13 districts of Timor-Leste met in Dili to form a national victims’ association. Participants cried out for justice, and called for an international tribunal.

We also stand with Amnesty International, the United Nations, the President of Timor-Leste’s Court of Appeals, as well as many Timorese citizens, attorneys, and civil society organizations in questioning the unconstitutional release of Maternus Bere. We believe that it undermines the rule of law in Timor-Leste and international law. When leaders decide that the “national interest” requires the violation of the separation of powers and legal rules to satisfy the request of a foreign government, they endanger Timor-Leste’s hard-won sovereignty and Constitutional democracy.

You informed the Human Rights Council that “there was not a single soul lighting a candle in protest at the gates of the said embassy where the alleged mass murderer had been sheltered while awaiting medical evacuation.” This is clearly not untrue. Several of our members witnessed more than a hundred Timorese, many women dressed in black for mourning, participate in a candle-light vigil in front of the Indonesian embassy which was hosting Bere was at the time and for nearly two months afterwards (see photos at http://www.laohamutuk.org/Justice/99/bere/09MaternusBere.htm)).

In closing, we respectfully ask you to acknowledge and listen to the many organizations and individuals, both Timorese and non-Timorese, who continue to believe that an international tribunal is the best legal, moral and practical way for the people of Timor-Leste to move beyond conflict, trauma and injustice toward a peaceful future.

'We write this letter to express our desire for continuing dialogue. Whether or not we eventually reach the same conclusions, we believe that our debates can be conducted without casting aspersions, questioning motives, or engaging in insults or personal attacks. In Timor-Leste, you are well-known for supporting honest dialogue conducted with mutual respect as a method to resolve differences. These principles should also apply internationally, and we encourage you to return to them.

Image added by ETLJB: The protest outside the Indonesian embassy in Dili when Bere was illegally released by the Government of Xanana Gusmao.
at Wednesday, March 24, 2010