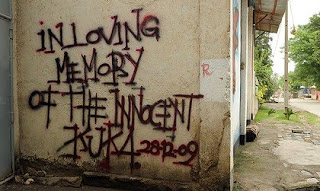 Saldanha made the comment after some national police officers had carried out their task unprofessionally, particularly in responding to a case.

Saldanha added that the National Police officers had sometimes breached the law in responding to cases such as the recent operation on ninja gangs in Bobonaro and Kovalima districts, the Delta Nova shooting death and the brutal assault by police officers of Mr. Leo Chomacose, a resident of Atauro Island.

Saldanha also said that it was important that the police officers know the ethics code use to approach or respond to incidents.
at Thursday, March 25, 2010