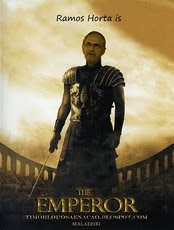 TIMOR-LESTE PRESIDENT Jose Ramos Horta yesterday launched a stinging attack on donors, accusing them of “wasting money” on “peace workshops” in his country.

Speaking during a state visit to Ireland, Dr Ramos Horta stressed one of the lessons of his country’s journey from conflict was that peace has to come from within”, and that peace building is “complex and takes many forms”.

It is not like academics or some western donors or the UN who think that if you finance a few workshops and write a report you have contributed to peace,” the Nobel peace laureate told The Irish Times. I have seen so much money wasted by donors on peace workshop after peace workshop. It is much more than that. It is meeting with families and with the victims day in, day out; it is finding jobs for them; providing them with training, with funding to create jobs; creating hopes and a future for them.

Peace-building is not based on workshops or UN evaluation missions who descend on our country every three months to do an evaluation. These are wasteful exercises.”

Dr Ramos Horta was equally scathing about the issue of post-conflict justice in the Timor-Leste context. “When it comes to , everybody wants to do some experiment on democracy or justice. I simply say no,” he said. “The midget intellectuals who regurgitate academic jargon about justice can go on and on dispensing academic judgments on poor little us, but my people, whom I know well, they applaud the wisdom of my policies ­ that is: heal the wounds, reconcile, and move on . . . I am not going to play Don Quixote de la Mancha of justice to pursue every seen or unseen culprit of the past.”

Timor-Leste broke from more than two decades of Indonesian occupation in 1999. After three years under a transitional UN administration, the country declared independence in 2002.

Dr Ramos Horta described current relations with Indonesia as exemplary”. He said the overall situation in Timor-Leste had improved significantly” in recent years. “The country is very peaceful; common criminality is the lowest in the region; economically we are not doing too bad ­ growth last year was 14 per cent. Unemployment remains significant, but it has been reduced in the past few years through different schemes.”

Last month, UN secretary-general Ban Ki-moon warned that “institutions are still fragile” in Timor-Leste, adding that several underlying factors that contributed to serious violence and the collapse of its government in 2006 remain, despite the steps taken.

Dr Ramos Horta, who has previously spoken of his wish that Timor-Leste become “the Dubai of southeast Asia”, argued that much progress has been achieved, given that the state is only eight years old. “When I say I aspire for Timor-Leste to be like Singapore or Dubai, I know at the same time there is no magic wand . . . You have a vision and you try to work towards that vision.”

Last week, a court in the capital, Dili, sentenced more than 20 rebels over the attempted assassination of Dr Ramos Horta and prime minister Xanana Gusmão two years ago.

All violence has stopped ever since . This shows the revulsion it caused,” he said.

Timor-Leste was designated a priority country by Irish Aid, the Government’s overseas development division, in 2003.

From 2003 to 2009, Irish Aid provided more than €30 million towards poverty reduction programmes and projects aimed at strengthening governance, human rights and public service capacity. The Department of Foreign Affairs also engages with Timor-Leste through its conflict resolution unit.
at Wednesday, March 10, 2010

Mr Ramos-Horta is right. Donors and do-gooders are a menace. They cause more damage than good. Timor Leste is a new country and as such many jump on the bandwagon armed with their own well-used one-size-fits-all paradigm and pretend to teach people who have fought and survived for several years how to achieve peace through seminars and how to serve at tables and make jams through their training centers. However, before engaging in mud slinging Mr Horta should also look at the other end of the equation; the intellectual midgets entrenched in the top TL hierarchy ready to throw the doors wide open to large interests in exchange for palatial buildings to satisfy their midget egos and without giving a second thought to the hidden agenda of these concerns who will deplete the country of its natural resources and take all the profits abroad, leaving the Timorese once again as faithful spectators while those who should defend their interests scuffle around to enrich themselves by kowtowing to the new colonizers. Mr Horta should look around himself and identify the local intellectual midgets who, without a shred of vision or compassion for the suffering of the TL people over several years, are selling the country every day for their own selfish interest or just through sheer stupidity.