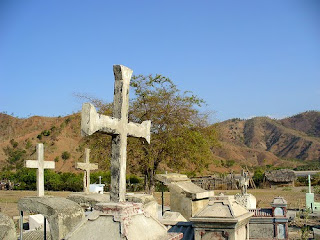 Remains of nine found in Timor graves By Jill Jolliffe From: AAP March 05, 2010 8:09PM - FORENSIC experts are examining the remains of nine people found in two graves near Dili who they suspect were executed during Indonesia's 24-year occupation of the former Portuguese colony.

"They were tied around the neck, legs and arms and, although there is no flesh, there were bullets stuck to the bones and inside the victims' shirts as well as loose in the graves."

One grave held seven bodies, the other two.

The discovery was made west of Dili on land of a luxury hotel development by the Malaysian consortium Pelican Paradise Resort.

Speaking by telephone from the East Timorese capital, Mr Saldanha said he had appealed to the company to stop building until the site could be searched thoroughly.

"They gave no clear reply, saying they were 'following the situation'," he said.

Mr Saldanha served eight years in Indonesian prisons during the Suharto dictatorship for his role in organising a demonstration at Santa Cruz, Dili, in November 1991 which resulted in a massacre of students by the Indonesian army.

His 12 November Committee is leading a search for their bodies, working with an Australian-Argentinian forensic team led by Dr Soren Blau of Melbourne.

Last year, they found 16 bodies at Hera, 15 kilometres east of Dili, some of which have been identified by families of the Santa Cruz protesters.

He said the newly-found bodies were not of Santa Cruz victims, who were student protesters.

"Their clothes are of an earlier period and the bones of older people. It is most likely they were people taken for execution from Dili prisons," he said.

Another grave with five bodies was found in September 2008 under the end of the Dili airport runway, which had been damaged by floods.

Apparently buried years before, they were exhumed by UN police, who found bullet holes in their skulls.

Details were shown in Australia on ABC Television, but not in Timor, although scores of grieving families are searching for relatives who disappeared in the occupation era.

Some suspect a UN cover-up and believe the bodies masked a larger mass grave.

The area was later concreted over.

The UN has a mandate to prosecute war crimes in 1999 only, the year of the Indonesian army's scorched earth withdrawal.

"They are all Timorese. All deaths between 1975 and 1999 deserve investigation," he said.

Image added by ETLJB: A cemetary at Tasi Tolu, west of Dili, East Timor near where the remains of victims of Indonesian atrocities in that country were recently found.
at Saturday, March 06, 2010