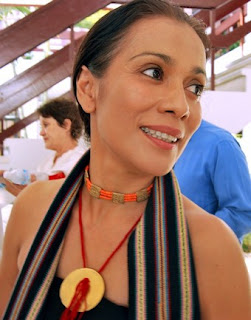 The Dili District Court dismissed all charges against Ms Pires who has vehemently denied the allegations since President Ramos Horta publicly accused her of being the mastermind of a plot to murder East Timor's leading political figures.

Ms Pires broke down and cried as the verdict was announced in Dili this afternoon."Today is the most important day of my life. I have rightfully regained my freedom," she said after the three-judge panel announced the verdict.

Outside the Court Ms Pires thanked her supporters and vowed to fight on for her co-defendants, most of whom were convicted of various crimes.

The co-defendants were the group of military personnel who deserted the East Timor Defence Force in the wake of a disintegration of the rule of law in 2006 that lead to the deaths of at least 37 people, human rights abuses by the military and the police and hundreds of thousands of citizens displaced.

Ms Pires was involved in a personal relationship with the leader of the rebels to whom she was pregnant.  Reinado was gunned down at close range on 11 February 2008 in the grounds of the Presidential residence during an alleged attack on Ramos Horta by Reinado and his men.

Ms Pires miscarried the child after after she was hit with dozens of charges of conspiracy to murder.

Mr Pires' father was an administrator during the Portuguese colonial period in East Timor. Her family fled the country to Darwin in nothern Australia after Indonesia invaded in 1975 and started its bloody occupation of this former European outpost in Southeast Asia that has reeled from crisis to crisis since independence in 2002.  She returned to East Timor after the 1999 referendum on the separation from Indonesia and has lived there since then working for both the United Nations and the government.

Ms Pires also lays claim to significant lands in central Dili and at Christo Rei beach to the east of the city that she claims her family owns on the basis of old Portuguese land titles.

It is not known whether the prosecution will appeal the decision.
at Wednesday, March 03, 2010