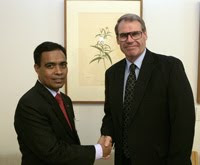 Senator Faulkner and Secretary Pinto discussed a range of issues including the improved security situation in East Timor, the role of the International Stabilisation Force (ISF) and opportunities for enhanced maritime cooperation and peacekeeping training.

"It is a great pleasure to welcome Secretary Pinto on his first official visit to Australia," Senator Faulkner said.

"The visit reflects the strengthening ties between our two countries and our continuing mutual commitment to regional security and stability."

The security situation in East Timor has remained stable since February 2008.  The focus of the ISF in East Timor is changing from security operations to Defence cooperation and capacity-building to support the development of the East Timorese military.

Further information concerning Operation ASTUTE can be found at: www.defence.gov.au/opEX/global/opastute

Media note:  Imagery will be made available at: www.defence.gov.au/media/download/2010/Mar