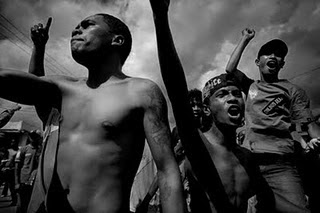 Televizaun Timor-Leste March 2, 2010 language source: Tetun -  Family members and friends of Frederico Florindo Ki’ak and Alberto da Costa said that the court decision to imprison two reservists of the F-FDTL was unjust and therefore they are not going to hand in the two to be imprisoned.

They called on the political leaders of the country such as President of the Republic, Prime Minister and Speaker of the National Parliament to intervene into the case as they believe that the imprisonment of the two will spur new conflict in the country.

He believed that the imprisonment of the two members will affect stability in the country.

Both Ki’ak and Alberto da Costa were charged with eight and six years imprisonment for the road blockage in on 25 May 2006 during which a person killed and two other people were injured.
-----
Ki’ak and Alberto can appeal, said Alkatiri Diario Nacional, March 2, 2010 language source: Tetun -  East Timorese former Prime Minister Marí Alkatiri said that Fredêrico Florindo ‘Ki’ak’ and Alberto da Costa can still make their appeal at the high court for the decision of the Dili District Court.

“The lawyer has to work hard so that when they appeal at the high court the decision of the Dili District Court could be overturned,” said Alkatiri.

Mr. Alkatiri also said that he does not want to make any interference into the judicial systems but to say that until the decision of the appeal court comes out, there process is still ongoing where corroborating evidence could be presented to help judges decide on the case.

Meanwhile, MP Lucas da Costa from PD lauded the presence of Ki’ak and Alberto to face justice as heroic.

“I would like to laude their willingness to face the court to seek for justice,” he said.
at Thursday, March 04, 2010