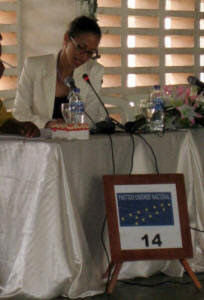 Timorese justice oppressed the poor: MP Diario Nacional, March 1, 2010 language source: Tetun -  The Parliamentary Committee A for Law and Constitution President, Fernanda Borges, has said that the Timorese judicial system is only applied to the poor people and it has never apply to the Government’s officers.

“Justice in Timor-Leste only applicable to the poor or common people and has never applied to the Government’s officers,” Mrs. Borges said.

Mrs. Borges made the comment regarding the recent decision made by the court where Frederico “Oan Kiak” and Alberto da Costa Belo were sentenced to eight years and six years imprisonment for their involvement in the 2006 crisis.

Mrs. Borges added that Mr. Florindo and Belo involved in the 2006 crisis because they were asked by the Timorese Defense Force (F-FDTL) commanders to join the state’s national army to ensure security in the country.