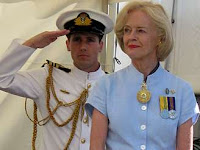 The Daily Telegraph (Australia) 10 December2008 Her Excellency the Governor-General of Australia, Ms. Quentin Bryce, will visit about 800 Australian police and peacekeeping troops in East Timor to honour their work.

During an official visit this weekend, Ms Bryce and husband Michael will meet 50 Australians in the UN Police force in Timor-Leste and 750 in the peacekeeping force at the International Stabilisation Forces heliport.

Image: HE Ms Quentin Bryce, Governor-General of the Commonwealth of Australia
at Thursday, December 11, 2008