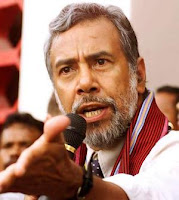 According to The Australian journal, in an article published in the edition on Tuesday (23/12), created by the journalist Mark Dodd ("East Timor" at risk of anarchy 'says UN report"), East Timor live a chaotic situation:

"East Timor risks a repeat of the anarchy that gripped the country in 2006 were it Dysfunctional has a police force, the chaotic justice system, the divided political leadership grappling with" dismal "social problems and an economy facing a" precipitous fall "in oil revenue. "

The author mentioned, as an alleged source, one report, from the United Nations that would aim to base decisions for future UN missions in East Timor. However, the nature of this source is based on leaks of information or, quite possibly, very convenient information based in political and geostrategic interests behind this disclosure.

According to the press release of UNMIT (24/12), the internal situation in Timor-Leste (2008) is perfectly normal, as the title of the official notice "Progress in East Timor in 2008, quiet and peaceful situation."

Thus, the alleged report did not come from UN. Once again, we are dealing with speculation, other interests and even worse, with the aim of achieving certain objectives: political, economic and geostrategic.

Indeed, after one trilateral meeting with UNPOL, ISF and the Timorese authorities, where was discussed the situation in East-Timor (at previous months), the level of internal security was considered improved in all aspects. This situation reflects the cooperation between the International Forces (UNPOL, ISF) and the National Authorities, PNTL and F-FDTL.

In a press conference held this Friday (22/12), after one meeting with the Acting Inspector PNTL, Afonso de Jesus, and UNPOL, the evaluation for same situation, internal security, was positive.

Confronted with this campaign of disinformation, we want to report some facts:

• Stability and security of the last recent years reflect the work and dedication of our National Police. We can observe that the normality we have in our society is due to the exercise of its responsibility to restore public order. It means that National Police is functional.

• Legal problems are not unique problems of East Timor. Unfortunately, they exist in all most of the world, even at the so-called first world countries.

• Disagreement is part of human nature and people of East-Timor and their leadership are not here too, exceptions. We believe that the differences are natural in all democracies and do not contribute to an eventual anarchy as The Australian describes.

• This government, led by Prime Minister Kay Rala Xanana Gusmão, manages to resolve, in one year, outstanding problems, inherited from the military and political crisis of 2006. In about one and a half years, the situations related to IDPs, petitioners, pensions for elderly, vulnerable and former combatants of national liberation, were resolved.

• The financial crisis is international and is responsible for instability in oil prices and scarcity of food. This crisis has affected the whole world, including major economies. Given this reality, the Government of Timor-Leste has created an Economic Stabilization Fund in response to the current crisis and others that eventually the successor.