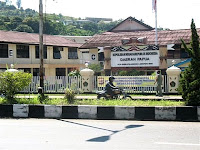 The patterns of systematic abuses of human rights and crimes against humanity perpetrated by Indonesian state agents in East Timor during the illegal occupation between 1975 and 1999 continue unabated in another fraudulently acquired province - Papua. The following report demonstrates many parrallels between these patterns of abuse between Papua and East Timor.

From Inside Indonesia 94 October - December 2008

Anselina Temkon’s son, Arnold Omba, took part in a major demonstration against Freeport Mining Company on 16 March 2006 in Abepura. The demonstration at one of the world’s largest gold and copper mines turned to chaos, with protestors killing four police officers and one air force intelligence agent. In response, the police launched house-to-house searches in Abepura. Unable to find the perpetrators, they arrested, detained and charged student protesters with murder. The court sentenced 23 suspects, the majority of whom are students, to between five and 15 years in prison.

Arnold was one of the protest coordinators. Because the police were unable to find and arrest him, they arrested and detained Ms Temkon in order to force her to tell them where her son was hiding. Anselina was interrogated for three days at the Papua Police Headquarters in Jayapura. After she told them where he was, the police continued to interrogate her, showing her pictures she didn’t recognise and asking her who they were. When she asked the police to show her a picture of her son stoning the police, no such picture could be produced. By the second day, Anselina was hallucinating, but still they kept interrogating her. By the third day, she felt as if she was going mad.

Anselina’s story is representative of hundreds more recorded stories of torture in Papua – as well as many other untold ones – that have shaped the collective memory of Papuans. Her case is one of 242 individual torture cases reported to the UN Committee against Torture (UN CAT) in Geneva during its 2008 review of torture in Indonesia. Presented in a report on a decade of torture, these testimonies revealed the number and patterns of torture cases in Papua, as well as the impact of torture on the Papuan community.

Torture is a common practice in Papua. The police and the military employ methods including beating with blunt instruments, the use of electric shock, humiliation in public and interruption of normal sleeping patterns. In most cases, torture is perpetrated against those who are considered separatists, suggesting a strong relationship between the practice of torture and government policy towards West Papua. In all reported cases, the degrading treatment of Papuans appears to be linked to racial discrimination by members of the security forces who believe that they have the right to do whatever they want towards indigenous Papuans because they are racially superior.

The Abepura case was the first case to be brought before Indonesia’s Permanent Human Rights Court in Makassar under the Law No. 26 of 2000. The two accused, Senior Commissioner Daud Sihombing and Senior Commissioner Djoni Waenal Usman, were acquitted. Both officers were later promoted. The fact that the perpetrators were not punished also means that victims have been unable to pursue legal remedies for the suffering they have endured.

While torture is recognised under the Human Rights Court Act as a crime against humanity if committed on a widespread and systematic basis, individual acts of torture are not recognised as a crime under the Indonesian Criminal Code (KUHP). But although reports of other cases have been submitted to the relevant authorities at both the local and national level, no other torture case has been pursued. Meanwhile, victims are unable to complain through ordinary domestic legal mechanisms, and no independent complaint mechanism is available. Without effective mechanisms, it is no easy task to address the problem of torture in Papua.

The report’s authors recommended that the UN Committee Against Torture urge the Indonesian government to implement laws criminalising individual acts of torture and creating complaint mechanisms. Indonesia must also prosecute perpetrators and provide justice and compensation for victims. In order to do this, Indonesia should make a declaration under Articles 21 and 22 of the Convention Against Torture, which would enable Indonesian citizens to file international complaints with the Committee Against Torture. It should also ratify the Optional Protocol to the Convention Against Torture, under which it would be legally bound to establish a mechanism to allow individuals to file complaints against the state and to provide compensation to victims.

The continuing use of torture and the authorities’ failure to provide justice, medical treatment or any other form of compensation to ease victims’ suffering has galvanised antipathy towards the government – and particularly the security services – in Papua. These issues must be addressed before the community can even begin to think about moving on. ii