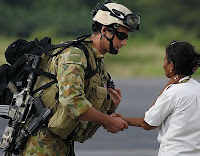 Submission to the Parliament of Australia Joint Standing Committee on Foreign Affairs, Defence and Trade Inquiry into Human Rights Mechanisms and the Asia-Pacific November 2008

La'o Hamutuk is a Timorese non-government organisation which monitors and analyses the role of international institutions in Timor-Leste. We thank the Committee for the opportunity to present this submission and provide permission for this submission to be published.

Our submission examines Australia’s role in the International Stabilisation Force (ISF) in Timor-Leste. It is of relevance to the Committee’s Terms of Reference because:

a. International peacekeeping forces have the ability to strengthen human rights by ensuring security and stability when local forces are unable to, facilitating the rule of law.

b. The ISF works in cooperation with, but not under the United Nations (UN) mission in Timor-Leste. We will comment on the implications of this arrangement for human rights.

d. The terms of Australia’s military involvement in Timor-Leste under the ISF were agreed to under the previous Australian Government. Decision-making on these terms did not incorporate the Timorese Parliament.

In 1999, Australian forces first engaged in peacekeeping in Timor-Leste under the International Force East Timor (INTERFET). Although not without shortcomings, INTERFET made an important contribution during the 1999 post-referendum violence and a tenuous security situation in 2000. It provided a clear contrast to the corrupt, violent and abusive Indonesian military. Many Australians who served under INTERFET are profoundly affected by their experience and Australia should be rightly proud of its contribution at this time.

In May 2006, the Timor-Leste Government requested international assistance as the rule of law was rapidly deteriorating in the capital, Dili. At this time the Timorese police (PNTL) and military (F-FDTL) were not functioning well, with many members leaving their posts. This was accompanied by civil violence. Portugal, Malaysia, Australia and New Zealand contributed personnel to the ISF, with the latter three countries operating under Australian command. Although the Timorese government asked for only a few hundred military personnel, Australia sent many more.

After a relatively brief period, the security situation stabilised. Although there have been security setbacks in Timor-Leste skirmishes with an armed group in the interior, post-election violence in 2007, and a February 2008 attack against the Prime Minister and President high level violence is not on-going or widespread. The PNTL is being phased back into service and the F-FDTL is on active duty.

Human Rights and the Status of Forces Agreements

The challenge of peacekeeping is that if governments believe their troop contributions heighten the risk of diplomatic incidents if their personnel commit crimes, they will decline to send troops. The UN system is therefore very important to ensure there is accountability for peacekeepers.

In 2006 many people in Timor-Leste expected that all international forces operating in Timor-Leste would be incorporated into a new UN mission (UNMIT), as was done in 2000. This time Australian, Portuguese and Malaysian police joined the UN force. However in August 2006 Australia refused to place its soldiers under UN command. This position was supported by the USA and UK, but opposed by the UN Secretary General, the Timor-Leste Government (which was pressured to reverse its position), the Timor-Leste Parliament, Portugal, Malaysia, NGOs in Timor-Leste and many others.

A prolonged and confused process within the UN Security Council followed, with the Core Group leader Japan misrepresenting the Timorese Government’s position the Timor-Leste government again reiterating that the ISF should be integrated into the UN. When Australia still did not allow its forces to be part of the UN, the then-Prime Minister José Ramos Horta eventually accepted the ISF being outside the UN in late October 2006. (This position was not supported by the Timor-Leste Parliament). To avoid two separate foreign military forces operating simultaneously in Timor-Leste New Zealand agreed to continue under Australian command. This debate occurred at a time in which the Timor-Leste Government faced many challenging domestic issues, and resources invested in this debate drew attention away from other areas.

Like the UN, ISF members are exempt from local laws and judicial systems. The ISF coordinates with the UN and Timor-Leste forces but does not come under UN command, nor under the UN systems of accountability which ensure that national forces operating in foreign countries must answer to an outside body. ISF personnel effectively have diplomatic immunity, both on and off duty.

This status for ISF personnel was initially provided under Status of Forces arrangements hurriedly agreed between the Timor-Leste and Australian governments while events unfolded in 2006. It was upheld in a 2007 Memorandum of Understanding between Timor-Leste, UNMIT and Australia, as Australia did not allow its military to join the UN mission.

Inability to Resolve Complaints Against the ADF in Timor-Leste

For over 400 years state security forces were used to suppress and violate, rather than respect and protect Timorese people’s human rights. The Portuguese army suppressed dissent and protected foreign colonisers. The Japanese military violently occupied Timor-Leste from 1942 – 1945. The Indonesian occupation from 1975 – 1999 was brutal, and its corrupt and lawless security forces permeated every level of the state.

It is important that the international community support Timor-Leste to reverse this culture of impunity by modeling a security sector which is fair and just.

There is no process for Timorese people to report and resolve problems with the ISF or ISF personnel. Because of the Australia-Timor-Leste Status of Forces arrangements Timorese citizens cannot resolve complaints in either the Timorese justice system or the UN system.

Informally we are told there are many unresolved complaints against members of the ISF. They are informal because there is no formal means of addressing them.

We would like to provide an example of how these arrangements affect Timorese people.

Human Rights lawyer Natercía Barbosa de Deus recounted to La’o Hamutuk her experience in managing a case of a collision between a Timorese man on motorbike and a truck driven by ISF personnel. The accident occurred in Dili on the afternoon of 10 August 2007, and resulted in the death of a Timorese man.

After the accident UN police (UNPol) investigators indicated to Ms. de Deus that their finding was that although the victim was rounding the corner on the inside lane, the ISF driver bore the greater responsibility for the accident as he was speeding. This contradicts the internal ISF finding that the ISF personnel bore no accountability. This position of ‘no accountability’ was taken soon after the accident, with a press release on August 12th stating:


An initial investigation has indicated that the motorcycle appeared to have crossed into the path of the International Stabilisation Force vehicle and, despite the actions of the driver of the vehicle to avoid the motorcycle, it collided with the vehicle.


The International Stabilisation Force regrets the loss of life in this tragic event and extends its condolences to the family of the deceased man.

The victim’s family is unable to pursue civil damages or a settlement through the Timor-Leste court system or any UN process.

Ms. de Deus told La’o Hamutuk that an UNPol member tried to facilitate a meeting between her and the ISF and that she attempted three times to meet in person with ISF personnel at their Caicoli barracks to try to resolve this case, but that each time the ISF cancelled the meeting. She was told that the ISF member involved was scared of meeting the family, and she believes he left Timor-Leste shortly after the accident.

At the time of his death, the victim was in steady employment as a security guard. The loss of family income means that the victim’s widow and five children cannot meet their rental payments and are unable to secure housing. The family had to leave their previous home and now live in a small shack which houses 20 - 30 people, leaving the victim’s young children susceptible to respiratory and other diseases.

This is in addition to the psychological and emotional impacts of any unnecessary death, and the knowledge that there has been no justice or accountability.

People cannot trust the ISF if it is responsible only to itself. It provides a bad example for Timorese soldiers that they do not need to follow the law or any justice system, that they can be secretive and unaccountable.

Supporting the Community and the Civil–Military Separation

We recognise the importance of the ISF in speaking directly with community members. However community liaison should respect the separation of civil and military arms of governance, which are fundamental to human rights.

Construction of community infrastructure by the ISF, such as schools and clinics, raises the question in people’s minds whether the community will miss out on future infrastructure if they complain about the Australian military. These activities can reinforce the dwi fungsi (dual function) precedent set by the Indonesian military, that security forces should make and implement decisions on the allocation of public infrastructure.[1] We encourage the ISF in finding ways to make a positive contribution to local communities for example we commend recent efforts on local procurement , but ask that it also respect the civil–military separation. We welcome Australian non-military support for community facilities.

When foreign peacekeepers do not know the history of Timor-Leste, its culture and its language they cannot act effectively. They cannot be sensitive to people’s experience under the Indonesian military occupation. The ISF has not used the reservoir of knowledge and relationships the ADF developed in Timor-Leste during INTERFET.

Carrying long arms at all times, on and off duty, even where there is a low security risk ­ such as speaking to small children, playing sport, shopping in a supermarket, eating at a restaurant or relaxing at the beach, is inappropriate and insensitive to a population traumatised by a brutal military occupation. It makes people feel unsafe.

In our experience the Australian Defence Force’s willingness or capacity to provide information to the public is not good. Contact details are given for ISF ‘Information Officers’ with no knowledge of what they are meant to be assisting with. Further contacts are promised, but not provided. Phone calls are not returned. Queries are diverted from one person to another. Information is not passed on.

We submit that the Committee should urge the government to:

* Integrate Australia’s military into the UN peacekeeping force and chain of command, including decisions as to whether Timor-Leste requires a smaller international military force.

* Ensure a clear, independent and transparent process for Timorese citizens to report and resolve complaints against the Australian military. Distribute information on this process in written and oral form in languages local people understand.

* Work with the UN to find a way to investigate and resolve current complaints against the ISF and other security personnel in an open manner.

* Recognise a clear, transparent and honest mechanism for managing the public’s questions and queries as an integral part of peacebuilding.

* End the policy of carrying long arms at all times irrespective of risk.

Further information related to the ISF is available on La’o Hamutuk’s website www.laohamutuk.org. This includes information on the Australian Status of Forces arrangements, the formation of the current UN mission and reports to the UN on Timor-Leste’s security situation. We are available to provide more information on these issues at committee hearings in Australia or Timor-Leste, or other forums provided by the Committee.

[1] The withdrawal of Australian support in response to criticism has occurred before in Timor-Leste. In 2005 AusAid revoked funding to a prison monitoring and legal rights project by local NGO Forum Tau Matan (FTM). Former head of AusAid in Timor-Leste, Peter Ellis, says this decision was based on FTM’s role in an NGO coalition which opposed the Australian government position on the Timor Sea negotiations, and called for a maritime boundary based on international law.