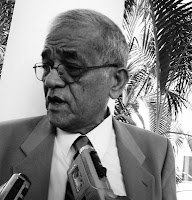 Council of ministers approves decree law on police promotion Radio Televisaun Timor Leste 18 December 2008 - The Council of the Ministers has approved a decree law on the promotion of the Timorese National Police (PNTL) officers.

Lasama thanks international agencies and development partners Radio Televisaun Timor Leste 18 December 2008 - Parliamentary President Fernando Lasama de Araujo has expressed thanks to the international agencies and development partners that have given contributions during a discussion on the state budget in Com of Lautem district.

Criterion of getting the MCC funds is complicated: Horta Radio Televisaun Timor Leste December 2008 - President Jose Ramos Horta said Timor-Leste would not get funds from the Millennium Challenge Corporation (MCC) because the method and criteria being applied by the MMC was complicated to be fulfilled by the poor countries.

Failing to get MMC funds does not mean the AMP is corrupt: Labeh director Timor Post December 2008 - Director for Labeh NGO, Christopher Henry Samson said taht because Timor-Leste had failed to get the Millennium Challenge Corporation (MCC) funds, that did not mean the Parliamentary Majority Alliance (AMP) Government was corrupt.