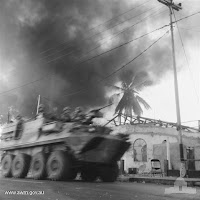 The Jakarta Post 21 December 2008 - Endy M. Bayuni - How much did we really know about East Timor in 1999 particularly about the aspirations of its people when an overwhelming majority of them voted, in an UN-organized plebiscite, to reject Indonesian rule and to establish their own separate state?

An Indonesian journalist assigned to cover East Timor that last fateful year of Indonesian military occupation learned, to her surprise and somewhat dismay, that Indonesia knew very little about the people and what they had gone through the previous 24 years.

Rien Koentari, reporting about East Timor for the Jakarta-based Kompas daily, has written a personal journal of her journey of discovery of the people, who in many respects are much like Indonesians, but for historical reasons, are very different from Indonesia and have now chosen a different path from Indonesia.

The book exposes our ignorance about a people who experienced such hardships during most of Indonesia's military rule that they not only had so much hatred toward Indonesia, but also and more importantly, had a strong desire to be free at almost any price.

It was this sentiment that many Indonesians grossly underestimated. No one, not even the most pessimistic of predictions, had expected that as many as 78 percent of the East Timorese would vote to reject Jakarta's offer to remain under Indonesian rule with the widest autonomy, and instead opt for independence.

Truth is always among the first casualties of war. Truth was indeed a scarce commodity when the military imposed an effective blanket news blackout between 1975 and 1991.

Not that it mattered all that much. The world was not just ignorant of the disputed territory, it was also uninterested.

The only news to come out of East Timor then was largely put out by Jakarta's Indonesian military and Radio Fretilin, the voice of the armed separatist rebels, broadcast from Darwin. It was difficult to discern the truth from among the propaganda that both sides put out.

Things changed following the massacre of peaceful demonstrators in the streets of Dili in Nov. 1991. East Timor began to attract international attention, media reporting improved, and Indonesia's appalling human rights record, particularly but not exclusively in East Timor, was now constantly on display.

By the time of the 1999 plebiscite, we had learned a lot more about East Timor, but obviously we still did not have the entire picture. There was still so much truth to uncover, as the author of the book learned.

Rien, among the few journalists who covered East Timor intensively throughout 1999, had a ringside view to that year's evolving debacle, and she learned a few more truths about the wishes of the people and the main reason why: The atrocities of the Indonesian military occupation.

After reporting directly about the process that had led to President B.J. Habibie's offering the East Timorese the option to vote in a plebiscite, she then covered the UN-sponsored vote. This included its preparations with its accompanying violence, the peaceful and orderly vote in September and its tragic aftermath when East Timor erupted into mayhem.

Last Minute details the personal dilemma the writer faced as she learned more truth during her work. A true Indonesian patriot, she changed her perceptions of the nature of the conflict as she dug deeper into her story.

At times, the book reflects her Indonesian bias (and ignorance); at other times, it reflects her sympathy toward the oppressed people.

But as her reports were becoming more balanced (or less distorted), some in the Indonesian military and government openly accused her of being too sympathetic to the rebels, so much so that she began to take the heat from the pro-Indonesian camp and possibly (she never found out) from elements in the military establishment.

One of the things that changed her perception of the war was her encounter with Taur Matan Ruak, a senior commander in the Falintil, the rebel's armed wing. Ever the tough journalist, she went through all kinds of hazards and obstacles to secure this very important meeting and interview. Another time, she learned that many East Timorese working as civil servants employed by the Indonesian government were disloyal to the state and privately supported the rebels.

But what probably affected her most deeply was the violence that she personally witnessed, perpetrated either by the Indonesian military and police or by the pro-Indonesian militias.

There was her vivid account of a cold-blooded murder of an East Timor student by a sharpshooter. Angry at what she saw, she reported it to the police's higher command, only to be told that the sharpshooter was an Indonesian soldier in a police uniform.

Concerned about her safety, at one point she asked to be removed from East Timor. It was not only her life that was in danger when she felt she had become a target, but also that of her colleagues. But, she soon recovered from her fears and asked her editors to send her back.

She returned, but again as tension mounted during and after the election, she had to do some maneuvering to keep out of danger's way, and finally escaped. She returned the third time to East Timor in September as a guest of the Australian-led international peacekeeping force.

The book's chief strength is the use of the first-person narrative style, truly an account taken from her reporter's notebook. It may not be coherently presented, but Rien takes us through her own personal journey and struggles, and thus her own evolving perceptions of what this conflict really meant for East Timorese -- and for Indonesians.

If Rien's reports published in Kompas were the first drafts of East Timor's history in 1999, this book coming out a decade later should count as the second draft. This time she wrote with more distance and thus a clearer perspective, but not necessarily with less passion. It will be up to historians perhaps in another decade or so to write up the history -- perhaps from these various drafts -- of this tragic episode in Timor Leste.