By Michael A. Fletcher and Walter Pincus Washington Post Staff Writers Friday, December 19, 2008; Page A15 - President-elect Barack Obama has settled on a former commander of U.S. forces in the Pacific to fill the nation's top intelligence job, congressional officials knowledgeable about the decision said yesterday.

If he is confirmed, retired Adm. Dennis C. Blair will become the nation's third director of national intelligence, succeeding Mike McConnell as leader of the federal government's 16 intelligence agencies. He had been the rumored front-runner for the job for several weeks, as Obama moved cautiously to make appointments to the nation's most sensitive intelligence posts.

"It's definitely Blair," said one congressional official who had been briefed on the selection and spoke on the condition of anonymity. The Obama transition team declined to comment.

Blair would be the second retired naval flag officer, after McConnell, to hold the post. Some members of Congress, in internal discussions with the Obama team, had objected to the appointment of another career military officer to head the country's civilian-run intelligence establishment.

Ultimately, however, resistance to the choice faded as lawmakers were swayed by the retired admiral's knowledge of the spy agencies and his ideas for streamlining and improving the often unwieldy U.S. intelligence apparatus, the sources said.

The job would make Blair, 61, Obama's senior intelligence adviser, supervising delivery of the president's daily intelligence briefing. But his most difficult task would be continuing the process, begun by his predecessors, of integrating the collection and analysis of information gathered by intelligence agencies. He would also be under pressure from Congress to cut the size of his own office, which has been criticized as another layer on top of an already overlapping bureaucracy.

A Naval Academy graduate who attended Oxford as a Rhodes scholar, Blair had served during the Clinton administration as a military liaison at the CIA in charge of coordinating intelligence between the spy agency and the Pentagon. He also served on Clinton's National Security Council, was director of the Joint Staff at the Pentagon and ran a successful counterterrorism operation against groups allied with al-Qaeda in Asia.

Described as independent-minded and cerebral, Blair advised Obama on defense matters in the Senate but otherwise had no formal ties to the Obama campaign. Since retiring from the Navy in 2002, he has held positions at several nonprofit agencies and participated in a major study on reforming the country's national security infrastructure.

While Blair is generally well regarded, his career has occasionally been marked by controversy. He was forced to resign as president of the Institute for Defense Analysis because of possible conflicts of interest after it was revealed that he simultaneously served on the boards of defense contractors whose products were being evaluated by the board.

He also came under criticism in the 1990s when his command provided support to the Indonesian military at a time when that country was violently suppressing an uprising in Indonesian-administered East Timor. An East Timor advocacy group has collected hundreds of signatures for a letter to Obama urging him to reject Blair. 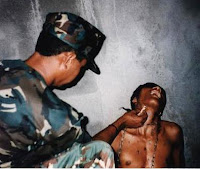 "Blair sought the quickest possible restoration of military assistance, despite Indonesia's highly destructive exit and the failure, which continues to this day, to prosecute the senior officials who oversaw the violence," the Brooklyn-based East Timor and Indonesian Action Network said in its petition. "This lack of concern for human rights shows that he is unlikely to be a champion of reform."

While Obama has moved swiftly to fill many top jobs in his administration, he has been more deliberate in appointing candidates to top intelligence posts. Analysts say Obama's caution reflects both the conflicting pressures he faces in filling the jobs and his own relative lack of experience in the area. His task is complicated by concerns among Democrats on Capitol Hill that those picked should not have been directly involved in harsh interrogation techniques, including waterboarding, that have been used against detainees during the Bush administration.