Heroes In Blue: A riotous 6 months in Timor Leste 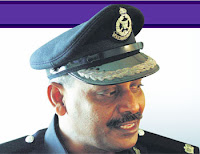 FOR Deputy Superintendent Indraraja Mootatamby, his six-month tour of duty under the United Nations in the small but troubled new nation of Timor Leste was "a riot".

"There was a riot every day," said the deputy commanding officer of the 10th Battalion of the General Operations Force based in Sibu.

Indraraja and 140 officers and men, drawn from GOF units in Sarawak, served in the strife torn nation between Oct 3 last year, and April 6.

There were 42 contingents from other nations serving there but the Malaysian and Portuguese contingents were given the toughest assignments as they could communicate easily with the locals. The Malaysians were stationed in Dili, the capital.

"Our ability to understand Bahasa Indonesia was both an asset and a liability. The locals spoke either Portuguese or Bahasa Indonesia, we and the contingent from Portugal bore the brunt of the troubles as we could communicate with them.

"We had stones and spears thrown at us and were even shot at with arrows. Police contingents from other nations were assigned to less troubled spots and relatively easier tasks like guarding the international airport.

"The spears and arrows could kill. Some of my men had close brushes."

Indraraja said there were many causes for the unrest in the country that was colonised by Portugal in the 16th century.

In late 1975, the country, then known as East Timor declared its independence but was invaded and occupied by Indonesia later that year.

In 1999, following a UN-sponsored act of self-determination, Indonesia relinquished control and the territory became an independent country on May 20, 2002.

"They'll riot over things like water. They'll break into buildings, mostly government, just to get water. When they are stopped, they'll go berserk and burn the building down," said Indraraja.

However, it was when two groups of rioters started fighting that Indraraja and his men faced the most danger.

"To disperse them, we got ourselves between the two groups. So we were in the crossfire of stones that they threw at one another. Our most lethal weapon was tear gas while they had spears and arrows."

The daily troubles had honed Indraraja's skills in handling riots as he had to draw on all of his police training and experience.

"We could not be seen to be taking sides. Everything we did was under a microscope and every mistake was magnified."

The spears and arrows didn't get Indraraja, but a mosquito nearly did. Two months before ending his tour, he was stricken with dengue fever.

Ten days in a Dili hospital and not responding to treatment, Indraraja was near death.

His dengue fever, which had contracted at the same time as the failed assassination attempt on the country's president, Jose Ramos Horta, on Feb 11, was further complicated when he contracted pneumonia.

The UN flew Indraraja to a hospital in Darwin, the same hospital where Ramos Horta was sent to. It would be two weeks before Indraraja could walk again.

"I thought I was about to die. I couldn't walk and if I did, I would be gasping for breath after two steps."

When he was about to be discharged, the doctor advised him to return to Malaysia as "another dengue attack could prove fatal".

The father of three ignored the advice and returned to Dili to complete his tour.

"I went with them and I had to return with them. There's no way I am going to leave without them."

Noting that the tour was a good experience, he said: "It brought out all that we were trained to be. But it's hard policing Dili, we walked a fine, thin line."

As a result, their stress level was high. "Six months sure was a long time." Asked how he would have felt if the tour had been extended? "Six months was long enough."