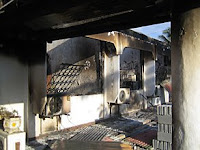 Catholic Relief Services Blog 10 December 2008 - Today is the 60th anniversary of the Universal Declaration of Human Rights. As part of our recognition of the document, CRS director, staff safety and security, Lara Puglielli wrote the following reflection.
Timor office

Following years of violence and abuse in East Timor, President (and Nobel Peace Prize winner) Jose Ramos Horta came under criticism for pardoning and setting free Timorese citizens associated with groups accused of committing abuses such as kidnapping of civilians. Some among the Timorese population feel that justice will not be served unless compensation is paid to injured parties and those responsible for wrongdoing are held accountable for what they did.

Ramos-Horta responded by saying that getting over a violent past is more important than prosecuting criminals behind the crimes.

“Justice is not and cannot be only prosecutorial in the sense of sending people to jail…. Justice must also be restorative,” Ramos-Horta was quoted as saying. “We as leaders of our people must lead our nations forward.”

Violence as recent as one year ago, including the burning of the CRS office in Baucau in August 2007, illustrates how difficult it is for a society–once divided and politically manipulated, once injured physically and spiritually–to forgive, reconcile and live in peace.

Can there be lasting peace when those responsible for crimes against humanity perhaps apologize but do not make amends through actions that say – this will never happen again, we have learned from our mistakes? Likewise, the actions of acknowledging wrongdoing, paying compensation, and/or ICC indictments seem to serve the ends of justice, but may not be sufficient to achieve true peace.

Justice with Peace seems to be a rare commodity these days, but some of the key ingredients include:

- a desire for peace from all parties

- mutual commitment to seek and acknowledge the truth about the past, not to dwell there, but in order to move past it

- mutual willingness to apologize, and forgive

- mutual actions that make amends, to the extent feasible, to correct past wrongs in a way that precludes their reoccurrence.

How can we each and collectively act to promote a just and peaceful world where the dignity of all persons is upheld?

The former CRS office in Baucau, East Timor was burned in post-electoral violence in August 2007. Photo by Jason Belanger/CRS.
at Sunday, December 28, 2008