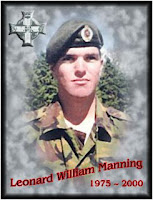 Scholarships awarded in memory of NZ soldier who died in Timor Fri, 12 Dec 2008 11:57a.m. - Eight East Timor school students have been awarded inaugural scholarships set up by the family of a New Zealand soldier killed during that country's fight for independence.

The East Timor School Trust was set up by Charlie and Linda Manning in memory of their son, Private Leonard Manning, who died on July 24, 2000 when his patrol was attacked in East Timor.

The killing was initially thought to have been by local militia fighting against independence from Indonesia.

However, authorities later believed the Indonesian Army's special force, the elite Kopassus, either trained the militia or were part of the attack because of the way it was done.

The attack followed warnings from East Timorese villagers to New Zealand peacekeepers that armed militia dressed in camouflage fatigues and wearing balaclavas, were in the area.

An Australian army brigadier said the attackers were highly trained in military techniques when they attacked the five-man scout group, killing Pte Manning, 24.

They all attend the Dom Bosco Technical School in at Fatumaca, northeast of the capital, Dili.

The scholarship would help with fees and living costs.