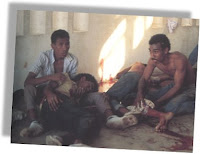 The Denver Post Posted: 12/12/2008 - Ali Alatas, 76, the former Indonesian foreign minister who had the delicate task of representing Indonesia during an often- brutal dictatorship and was once considered for the top job at the United Nations, died in Singapore on Thursday, a week after suffering a stroke, said senior government official Primo Alui Joelianto.

Alatas was the country's highest- ranking diplomat from 1988 until 1999 — the year after longtime President Suharto was swept from power.

He twice served as Indonesia's ambassador to the U.N., was chairman of international seminars and, most recently, acted as an adviser to President Susilo Bambang Yudhoyono.

Though well-respected, Alatas' legacy was tainted by atrocities carried out during Indonesia's 24-year occupation of East Timor that may have cost him a job as secretary-general of the United Nations, for which he was considered in the late 1990s.


Image: Vicitms of the Indonesian military's massacre of unarmed civilians at the Santa Cruz cemetery in Dili on 12 November 1991. Alatas called East Timor "a stone in the shoe".
at Friday, December 12, 2008