Alkatiri: Press has fabricated statement by Gusmao accusing me of ordering burning of Customs building in 2006 crisis 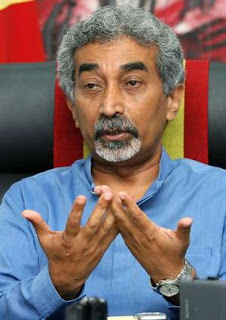 Televizaun Timor-Leste, April 27, 2010 language source: Tetun - Secretary General of the Fretilin Party has said Monday (26/4) during a press conference at the Headquarters of the party in Komoro that he does not believe that Xanana Gusmao had accused him saying that he ordered to set fire to the Customs’ Office in 2006 but it was a mere fabrication of the STL.

“If it (the statement of Gusmao) happened in 2007, I might have believed it. However if he said so in 2010, he is a liar because he has had all the data about it,” said Alkatiri.

Alkatiri made the statement after Suara Timor Lorosae (STL) daily newspaper on Monday published the statement of PM Xanana who had accused Fretilin as being more corrupt than AMP and accused Alkatiri of ordering the burning down of the Customs’ office in Kolmera in 2006.

“I don’t believe that Xanana said so but it is fabrication of the STL made with the intention create tensions between Fretilin and CNRT because there is a possibility for the two parties to have a coalition,” said the former Prime Minister who was toppled in 2006.

He said Fretilin members are everywhere to attend the consultation of the Prime Minister and his sources said that there was so such statement from Prime Minister Gusmao.

“We (Fretilin) follow the process because Fretilin is everywhere,” said Alkatiri.

He argued that the document was totally backed up and therefore there was nothing lost about the data of the Customs’ Department.

Regarding the consultation of the 2020 National Development Plan, Alkatiri said Gusmao is indeed doing a pre-campaign.

He said that consultation should be done by his technical staff but his direct involvement in the process is more than a political campaign.
at Wednesday, April 28, 2010