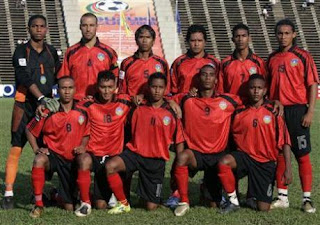 When the rag-tag national side of East Timor drew 2-2 with fellow strugglers Cambodia last week, they clinched the first point they had ever won to stem a seemingly endless run of defeats.

FIFA's lowest-ranked nation finally had something to celebrate.

"We are not happy with our world ranking and we are hoping our players will continue to improve," he told Reuters.

Almeida says it is no surprise that his team of inexperienced misfits have never won a match.

Although aid and investment have trickled into the cash-strapped Southeast Asian nation since it gained full independence in 2002, hardly any has been spent on sport.

The country's handful of balding soccer pitches are barely usable and its federation chiefs say it is almost impossible to find opponents for friendly matches.

The soldiers, grocers and port workers who make up the national side receive no money or expenses and many struggle to fulfil their international soccer commitments.

"We have no resources to keep this team together and we barely have grass to play on," added the 53-year-old Almeida, who has introduced 12 new players in the last month alone.

"The squad changes constantly because the players have families and cannot afford time off work. When they are 21 or 22, they have to quit."

There are signs of better things to come, however.

East Timor were only 10 minutes away from their first win when they conceded a late goal against the Cambodians, while a clumsy own goal denied them a shock draw on their World Cup qualifying debut against Hong Kong a year ago.

World governing body FIFA has pledged to improve some of East Timor's rugged playing surfaces by the end of next year and Almeida says the team's confidence is growing fast.

Defender Alfredo Esteves, who plays for unfashionable Australian outfit Wollongong FC, is East Timor's only professional player but he believes others will soon follow in his footsteps.

"Everyone has seen that East Timor's performance has been improving," said the Portuguese-born Esteves, who reached the peak of his career playing in the United States with the Minnesota Thunder and the New Hampshire Phantoms.

"We have a lot of young players and we now feel the future will be better for us.

"I believe that we will grow and we will show to other national teams that even East Timor can play football too," added Esteves, who at 32 is the team's most experienced campaigner.

The inspirational captain, however, does not have high hopes for the team, who in 2006 reached their highest ranking -- 198th of the 200 competing countries.

"My ambition is just to have more games for East Timor to play," he said.

With a little help, coach Almeida believes his side can pull away from teams such as the Cook Islands, American Samoa and Montserrat, their long-time friends at the foot of the rankings table.

He does not ask for much. For now, a pitch with grass will do.

"We cannot see our first win coming in the next few years but we will never quit," he said.

"But soon we will get our first good pitch and we hope to have another. That will help our players to develop and represent their country at a much better level."

Image: The East Timor national football team pose before their match against Brunei during their Asean Football Federation Suzuki Cup 2008 qualifier at the Olympic national stadium in Phnom Penh October 23, 2008
at Monday, April 26, 2010