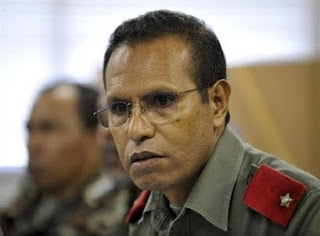 The attack was alleged to be directed by Abilio ‘Mausoko’ Mesquita, Artur Havelar, Arlindo da Costa, and Valente de Araujo who were members of the National Police Force (PNTL).

According to Paulo dos Remedios, a lawyer for Abilio Mesquita, the case is reopened because their appeal to the Court of Appeal regarding the case was successful.

Dos Remedios said that he appealed against the decision of the court because the court failed to do the defendant’s request to have a visit to the residence of Taur Matan Ruak.

“The request was for the court to authorise a visit to the residence of Major General Taur Matan Ruak due to the principle of special diligence, as the right of the defendant based on the Process of Criminal Proceedings Article 252,” said Dos Remedios.

He added that in the previous judgment in 2007 and 2008, the court violated this right of defendant, the reason which made the Court of Appeal to over-rule the decision of the Dili District Court.

The hearing on Monday was presided over by Judge Joao Paulo and aided by Constancio Basmery and Deolindo de Jesus.

In the hearing, the office of public prosecution read the charges against the defendants.

On May 25, 2006 the residence of Taur Matan Ruak was under attack from PNTL members following the institutional conflict involving the two security and defence institutions.

Taur Matan Ruak, a Brigadier General, was at the Defence Force’s headquarters but his children were in there residence.

A team rescued Ruak’s children unharmed but Ruak’s body guards involved in a shoot-out with the attackers.