Fernandes: There is lack of equipments to combat illegal fishing 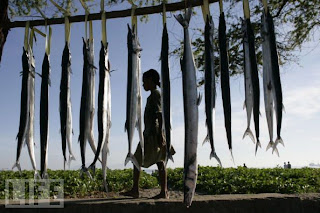 Diario Nacionál, April 23, 2010 language source: Tetun - The Timorese Operational Police, Superintendent Chief Mateus Fernandes, has said that it was difficult to combat illegal fishing in  Timorese  waters as there were no adequate equipments for the National Water Police and Force to control the illegal fishing.

“We all know that this is a serious problem for the National Police and Army, because we have undertaken our work to control illegal fishing but there is no positive result,” Fernandes said.

Fernandes added that the National Water police and the F-FDTL marine Force were collaborating with each other to control Timorese waters but there was a lack of equipment that can support them to undertake their work well.

“I have recently held a meeting with F-FDTL and I have information that illegal fishing was occuring not only in the waters near Illiomar in Lospalos only, but it was also happening in Manufahi and Likisa as well,” Fernandes said.
at Monday, April 26, 2010