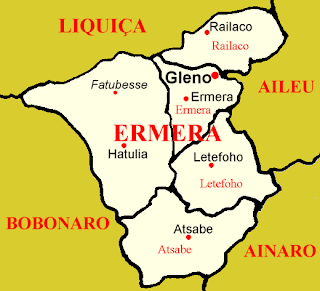 “I do not want to talk about these rumors, because we have not identified any illegal weapon to date. We also have not detained those people who put about these rumors and therefore we will tell the public the clarification about real situation after we detain the one who spread the rumors,” Fernandes said.

Fernandes said that it was important for the people not to believe in rumors since there was no evidence that can prove it, adding the all people should inform the National Police and Army including the United Nations Police and International Stabilization Force (ISF) when there was a fact.

Image added by ETLJB: Map showing the sub-districts of the central District of Ermera in East Timor
at Monday, April 26, 2010