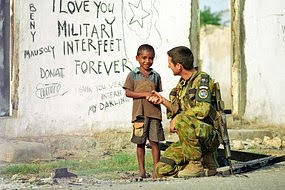 In 1999, East Timor was rebuilding after the violence which followed its overwhelming vote for independence from Indonesia in a UN-sponsored referendum.

Historian Steve Bullard says a commemorative address will be held today at the Australian War Memorial in Canberra to remember Australia's contribution.

"INTERFET in particular is important because it is the largest peacekeeping mission that Australia ever embarked on, and it was also the first time we had been the lead nation and also supplied the commander for that force," he said.

"It was the largest force we had sent over sea of any kind since the Vietnam War, and so marking 10 years is certainly a significant anniversary."
at Sunday, September 20, 2009